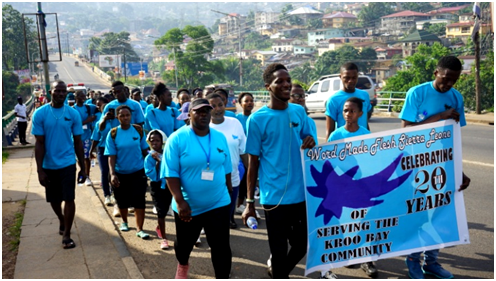 ‘Word Made Flesh’-Sierra Leone, an organization that has been extending love and care for youths, destitute families, and young children in Freetown, specifically those category of people residing within the Kroo Bay community, has commemorated its 20th Anniversary in the country.

As part of the organization’s activities in commemorating its 20th Year Anniversary, on Thursday 17th November 2022, a dinner was held at the Ale Ale House of Hope on May Street in Kingtom West End of Freetown which was followed by an Anniversary Celebratory 7 Kilometers Walk held on Saturday 19th November 2022 starting from the National Stadium gate to the Family Kingdom Resort on Aberdeen in Freetown.

Speaking to this medium, the Field Director of Word Made Flesh, Jennifer Seo Ney, revealed that the organization was established in Sierra Leone in 2002 after the brutal 10-year civil war in the country, adding that during the first few years when the organization was founded attention was initially focused on working with street youths but few years later their focus shifted to working with vulnerable children and families residing within the Kroo Bay slum community.

She maintained that the organization’s Mission is to holistically care for children and young adults through discipleship, offering educational/vocational opportunities and working towards building family-like relationships.

Jennifer Seo Ney stated that the organization has holistic programs which includes providing mentorship, education, health, prevention from Sexual Abuse etc. furthering that one their strategies is building good relationships with people, especially within communities they operate.

She revealed that during the 20 years of service in the country the organization has impacted so many lives and they have seen so many lives been transformed.

The Field Director pointed out that the AléAlé House of Hope, their Ministry Center, is a place where the children from Kroo Bay can experience community hospitality and safety and that in addition to their church activities, children are welcomed to share meals, grow a garden together and play in the playground, adding that the center is also a place where their international staff develop intimate relationships as they worship and learn together.

She said that the protection of children from sexual abuse is also part of their programs of which she underscored that girls in Kroo Bay are particularly vulnerable since many of them experience sexual abuse and exploitation from young ages and that the organization supports these children and their families by providing sexual abuse prevention education and counselling, as well as helping them receive medical care and pursue legal action against perpetrators.

Jennifer Seo Ney elaborated that through their Kroo Bay Outreach WMF staff, volunteers from nearby churches and some Lighthouse youth reach out weekly to build relationships with vulnerable families in Kroo Bay and  through compassionate listening and prayers, they seek to bring God’s love to those struggling with poverty at Kroo Bay.

She maintained that since the establishment of the organization they have transformed thousands of lives through their programs, they have supported vulnerable youths who were neglected but through the organization’s support they have become University graduates, furthering that through their women program they have empowered and given dignity to so many women within the Kroo Bay community disclosing how some of those women who were abused came to them and now they have been equipped with vocational skills.

“For the past 20 years we have journeyed with people through challenging times and we have seen them become important members in society. So we celebrate God’s faithfulness, we celebrate the lives that have been transformed,” she concluded.

On his part, the Director of Finance and Administration at Word Made Flesh Sierra Leone, Ansumana Bangura, said that they organization is very proud to state that for the past 20 years they have serve humanity within the Kroo Bay community.

He said that as part of the celebration the organization undertook several activities which include their Lighthouse Mentorship Program, which is an integrated program where youths in Kroo Bay, one of the poorest communities in Freetown, are intentionally disciplined and mentored through these activities: Weekly corporate worship, table fellowship, prayer and interactive Bible study, One-on-one small group meetings etc.

“20 years down the line we will continue to work with people within the Kroo Bay among the most impoverished of Freetown, sharing in their lives and hardships, building mutual relationships of caring and trust, and experiencing together the incarnate love of Jesus,” he maintained.

Narrating his testimony during the dinner, John G. Sesay, one of the beneficiaries of Word Made Flesh Sierra Leone, expressed appreciation for the support the organization has given to him over the years.

He said that 11 years ago he had an accident were he nearly died and that his entire family, including his father gave up upon him but said one day a staff of Word Made Flesh Sierra Leone visited the Kroo Bay Community specifically the hospital where he was admitted, adding the organization supported him in order to regain his health.

“After the accident, I couldn’t walk of which I became more vulnerable and neglected but through the support from Word Made Flesh Sierra Leone now I can walk. I was not going to school by then but the organization also supported me to go to school, I started schooling at age 19 today I have completed high school and am set to be enrolled at the Milton Magai University,” he expressed gratitude. 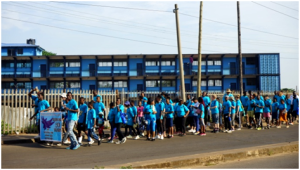