Mohamed Junior Sanago, popularly known as Yung Baller, is another newcomer in the entertainment music industry with impressive vibes, who has a unique power of making listeners fall for his records and him particularly.

He is also a producer with Sierra Leone as his home country but is currently residing in the United States of America. He has the natural knack to produce Afro Pop, R&B, Dancehall, Hip hop music tracks that are very enticing and gaining prominence. Yung Baller sings in English / Krio.  He grew up in Freetown in an industrial area with his mother, who is a Liberian, his father and five siblings.

He has never slowed down since he hit the industry with  banger singles, ‘Shocking Me’ and ’Strip’ .The popular songs topped several music charts in Uganda and ranked #4 on the Chart Beat alongside artists like Eddy Kenzo, John Blaq.

Yung Baller started his musical career in 2017 by uploading songs on his Sound Cloud account. In 2018, he released his first single called “Freaky” featuring Many Fresh. Another song released was “Roll Up” featuring a Ghanaian Artist called Edwino.

Baller, the young talented artist, has been featured by artists like Lib Flex, Togar Haward, Friday Da Cellphone Man and he has personally engineered various songs.

He worked relentlessly and successfully to convince countless listeners to become his fans in 2019 with impressive tracks and collaborations.

On ‘Strip’, featuring a Liberian artist, Pikasso, Yung Baller proved his distinctiveness as he displayed a diverse approach to the Afrobeat sound with lyrics that perfectly blend with his sharp voice.

From what many people who have listened to his songs, Yung Baller, has a bright prospect in the music industry as he is multi-talented and making steady in-roads in the industry that will definitely catapult him to higher heights. Presently constrained in certain ways, this promising Sierra Leonean artist is looking forward to individuals who will promote him financially and otherwise to see him make breakthroughs and put Sierra Leone on the international musical stage.

You can learn more about Yung Baller via the following Social Media platforms: 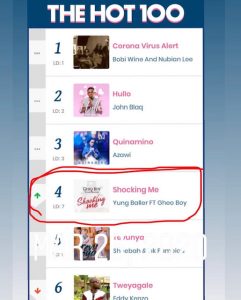