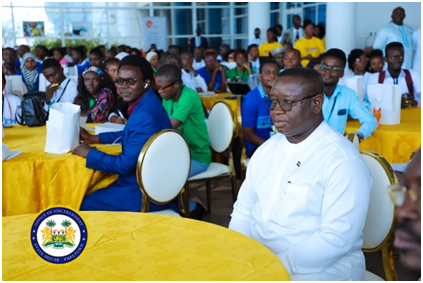 In a bid to bring job seekers and young entrepreneurs face to face with employers and experienced entrepreneurs in the country, the Government of Sierra Leone, through the Office of the Vice President on Thursday 17th November 2022 concluded three days first National Youth Employment and Entrepreneurship Fair on the theme:  “Be inspired, take ownership of your future career!”  at the Freetown International Conference Centre on Aberdeen in Freetown.

The National Youth Employment and Entrepreneurship Fair which was hosted in collaboration with the Ministries of Labour & Social Security, Technical & Higher Education, Trade & Industry, and Youth Affairs brought together over 500 promising young Sierra Leoneans from across the country.

Declaring the event opened the President addressed over 500 final-year students, graduates and young entrepreneurs from across the country, who have commenced a 3-day career fair, challenging them to be innovative and focused.

He said that he was informed that about six hundred young people, nearly fifty companies, and over two hundred entrepreneurs are participating in this fair. This fair not only connected young people to opportunities but also provided a platform for engaging all stakeholders about designing a cohesive, integrated, and sustainable job-creation strategy.

He noted that water-processing and packaging factories had generated more jobs and that as a result Sierra Leone was now exporting vegetable oil, soap, and other essentials to the sub-regional markets.

He President maintained that more businesses have been registered in the last four years than in any four year-period before and his government has provided more soft SME loans including the MUNAFA loans to Sierra Leoneans right across the country to start up and invest in their businesses.

He emphasized that the National Youth Employment and Entrepreneurship Fair was, therefore, not only hoping to build a bridge between his Government’s Human Capital Development investments and job creation, adding that it would also put young people directly in touch with potential employers.

He, however, said that potential employers will have an opportunity to listen to and take account of the voices and concerns of young people and also be able to support and advise them on navigating the job market.

He encouraged the participants to make use of the opportunity provided by his Government and build the skills and networking that they needed to not only get jobs but also start something around their own businesses.

The President thanked entrepreneurs, businesses, and service providers who supported the initiative of which he said as a Government, they are grateful for that initiative and look forward to working with the private sector to develop the business sector

He concluded by personally thanking the Vice President for collaborating with pertinent Ministries, Departments and Agencies in rolling out this maiden edition of the National Youth Employment and Entrepreneurship Fair.

In his statement, Vice President Dr. Mohammed Juldeh Jalloh said the event was designed to invest in the young people of Sierra Leone and to help them unleash their full potential in terms of creating and accessing jobs.

“Your Excellency Sir, we also have tutors and facilitators who will help youths and guide them in starting their own businesses, as there is a training component of the event,” he said.

Speaking on behalf of development partners, World Bank Country Manager, Abdu Muwonge, said the youths made up a major component of the development agenda of any country and encouraged commercial banks to take risks and support young entrepreneurs, especially through access to loans with favorable interest rates.

Minister of Youth and Culture from Rwanda, Hon. Rosemary Mbabazi, praised the initiative by the Government and encouraged young people to take advantage of the opportunities and secure their future, adding that her country would continue to engage the Government on possible exchange programmes for young people and businesses.

Minister of Youth Affairs, Mohammed Orman Bangura, narrated his true-life story and inspired young people to stay committed to dealing with taking responsibility for their future, specifically discouraging them from always blaming their families and Government for conditions they could change.