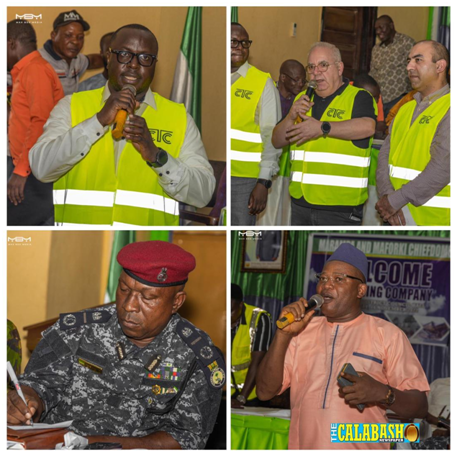 It will indeed be a momentous and unforgettable day as the 16th November, 2022 would be etched in time and eternity as a great day for the people of Marampa and Maforki Chiefdoms. Approaching the Port Loko Council office one would be tempted to think that a coronation or Dubar of Chiefs was going on.

One onlooker retorted that he has hardly seen this number of traditional rulers come to town for a normal meeting. The meeting was however far from normal.

In a jam-packed hall, stakeholders met to firstly present to the people of Marampa, Maforki, and the wider Port Loko, a mining company which according to a Paramount Chief fondly referred to as “The Lion” had found favour by meeting all the prescribed requirements by law and accorded the utmost respect to the Local Authorities and Landowners.

Secondly, but of greater importance the meeting was to allow the various other stakeholders an opportunity to comment, publicly agree, and or disagree.

Speaker after speaker ranging from youths to women, retired teachers, and the President of the Landowners, to artists and clerics joined the Paramount Chiefs, their representatives, and the entire hall to sound a unified and deafening sound of approval for the CTC Mining Company, whose parent body operates from Turkey.

The proceedings in the hall met stiff competition with the activities outside and many times could not match the drums and shouts from outside the hall. Traditional instruments, groups, and even a traditional music group with western styled uniforms were in attendance.

In what could be tagged as heartwarming and surreal was when the leader of the CTC mining company greeted the hall in the local language and said he was raised in Makeni. The hall erupted in joy as various groups broke out into dances. The CTC mining team was enveloped and dwarfed by the people. If someone was looking for a sign of approval, that should have ended their search.

CTC Mining Company promised in the presence of the District Chairman, the Mayor, the Rulers of Port Loko, the Senior District Officer, the Representative of the National Minerals Agency, the AIG regional North, the Military Brigade Commander, and as coined locally, before God and Man, that they are here to make a difference, and for the long run.

In addition to the mining business, the company also has investments in the renewable energy sector, primarily in biogas and solar energy. Effectively this could be the beginning of multiple employment avenues for the citizens of the country and new tax avenues for the Government of Sierra Leone.