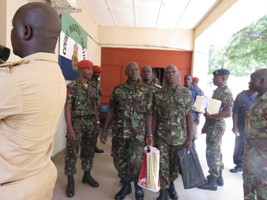 The first accused Captain Patrick Edwin Kamara on Tuesday 23rd April 2019 has told the Judge advocate Justice Momoh Jah Stevens, Chair and Board Members of the Court Martial that 900 millimeters of 14.5 AA rounds in 2013 were never used.
The first accused made this revelation, during cross-examination by Counsel for the State J.A.K Sesay at the on-going Court Martial at the Military Head Quarter at Cockerill. Captain Kamara said they were supposed to use the 900 rounds of 14.5 ammunition, but due to faults on the vehicle where this ammunition were supposed to be operated from, they were never used in 2013.
He added that the ammunition were dismantled from the truck, and later returned to the store and handed over to the third accused Abu Bakarr Jalloh. The Captain also noted that the last time he signed for ammunition was in 2018, confirming also to have signed for rounds of 14.5 and also 12.7 millimeters ammunitions.
The first accused maintained that all of the ammunition, which he signed for, and were based on the instructions of his former boss Lieutenant Colonel Sheku Tejan Sesay. He also said he was never officially assigned as the second in command in the Former Joint Presidential Guard Force (JPGF) of former President Ernest Bai Koroma, adding that he has never signed any document on behalf of the Chief of Defence Staff, while he was at JPGF.
“I can sign a document, carrying my correct name and designation and I can also sign for other people.” He pointed out also that the ammunition taken to the Presidential Lodge at Hill Station was escorted by armed escort officers at the Operational Store in the Presidential Lodge. “My lord this ammunition was taken from the store for test firing and training,” adding that some of the ammunition issued to him were in sealed tins.
The witness maintained that the administrative instructions for training were done by Lieutenant S.T. Sesay, stressing that also in 2013 he received ammunition for training under the instruction of his former boss. The accused further explained that, while they were doing the training exercises in 2013 for the former Joint Presidential Guard Force, he took two separate sets of videos and photographs of the sessions, adding that 2013 was the last training for the former Presidential Guard Force. Between 1st January 2008 and 19th June 2018, it was alleged that Captain Patrick Kamara, Samuel Conteh, Warrant Officer Class 1 and Abu Bakarr Jalloh, Warrant Officer Class 2 conspired and stole from the Government of Sierra Leone 4,245 rounds of 12.7 millimeters anti-aircraft ammunition, 3,828 round of 14.4 millimeters A. A. rounds, 11 grenades and 6 rounds of 7.62/39 amongst many others.
The trio are before a military Court Marital to answer to five charges, ranging from Conspiracy, Larceny by Servant, Wilful neglect and ordering damage to service property, wilful damage of service property, conduct that was prejudicial to the group order, and military discipline contrary to the Armed Forces of the Republic of Sierra Leone Act No.34 of 1961 as mentioned. The first accused Captain Patrick Edwin Kamara is represented by Ady Macauley, while D. Taylor is representing the second accused Samuel Conteh and Amadu Koroma is representing the third accused Abu Bakarr Jalloh.