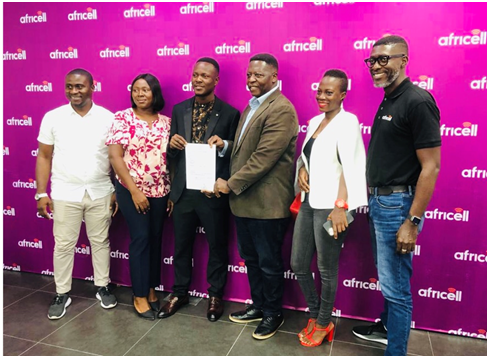 One of the leading telecommunication mobile companies, Africell-SL, officially signed a memorandum of understanding with one of the contestants of Housemates Salone Season 3, Osman Bendu, commonly called Mammy Thomas as their Digital Brand Ambassador with an undisclosed package on the 21st September, 2022.

The auspicious event took place at the Africell Headquarters Boardroom  Road at  Wilberforce Village in Freetown.

Speaking during the event, Africell’s Media Manager, John Konteh, intimated that the signing of Osman Bendu, is for him to represent Africell –SL on Social media platforms since  he has a large fan base of 82,000  followers on TikTok and other media platforms.

Konteh maintained that, ‘Mammy Thomas’ was one of the contestants that really made the Reality TV Show exciting through his comic acts in the just concluded Housemates Salone Season 3  though he was evicted from the House during the course of the show.

He noted that the company’s new Brand Ambassador will be  coordinating whatever things the company intends to put on social media platforms, especially on TikTok were he has a large fan base.

He asserted that, TikTok is the fastest growing media at the moment, continuing that through digital media, someone can quantify the number of audience or viewership that he/ she may want to reach.

Africell’s Chief Corporate Affairs Officer, Joe Abass Bangura,in his statement, disclosed  that, he has been going through Osman Bendu’s story for quite some time now. Stating that indeed he is from an humble background, and has made it through his life’s challenges.

Joe Abass Bangura continued that the company has been supporting youths in the country, further making reference to Kelvin Doe and Karim Brima, who won One billion Leones from Africell.

He assured that, Africell is not only meant for communication, but it is also there to enhance the life of young Sierra Leoneans, further revealing their plans to launch the Africell Foundation to reach out to more people.

The Chief Corporate Affairs Officer encouraged their new Brand Ambassador to continue pushing on, assuring him that he is in good hands furthering that comedy is a business and how laughter is a medicine to the soul as according to him he watches comedy on a daily basis.

He stated that Africell would continue to support young Sierra Leoneans financially, adding that the road to success in life is hard work, he made examples of popular Nigerian comedians; Ebu, Aki and Paw Paw and others underscoring that hard work requires consistency and lot more.

He concluded by congratulating Osman Bendu and urged him to do his best to have more and more followers.

The New Brand Ambassador, Osman Bendu, firstly thanked God, Africell and the Africa Young Voices Media Empire for their support in helping him achieve such a great success, disclosing that, he had not been thinking of achieving such in this stage of his life.

He also revealed that his Manager has been one of his strongest backbone and how she was the one that motivated him to be part of the show and assured the company that, he will do his best to promote the company’s brand.

‘Mammy Thomas’ revealed that if his father were alive, he would have loved to see this day, however, according to him, he believes that he is a happy man where ever he is knowing that he had made such achievements in his life.