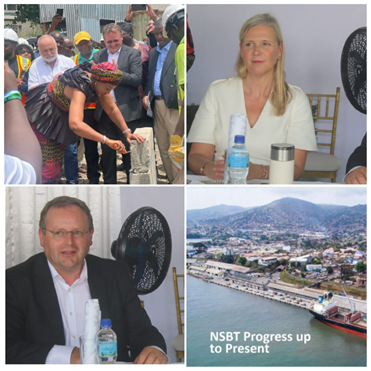 The ground breaking ceremony for the implementation of a Berth Expansion Project by Nectar Sierra Leone Bulk Terminal (NSBT) was done by the First Lady, Dr. Fatima Bio at the Queen Elizabeth the 11 Port commonly known as Water Quay in Freetown on the 9th June, 2022 during which occasion she served as the Guest of Honour.

The auspicious occasion was graced by the Minister of Trade and Industry, Dr Hinga Sandy, the Deputy Minister of Transport and Aviation ,Rex Bonapha, the Member of Parliament of Constituency 121, where the Project is implemented, Hon. Miniru Lansana, other high profiled personalities including the General Manager of the Sierra Leone Ports Authority (SLPA) and his Deputy, Dr Abdulai Fofana and Yakuba Askia Bio respectively, the SLPA Board Chairman , Manso Dumbuya, the Nectar Group Director, Guy Wikes, the Project  Consultant, Gordon  Rankine,  Project Contractor, Guilbaud Laurent, a representative from the National Commission for Privatization, Saffura Rogers, Staff of NSTB, well wishers and members of the Fourth Estate.

Chairman of the event, Dr Julius Spenser, underscored how the groundbreaking ceremony was a clear indication and manifestation of the fact that the country is making headway further expressing the hope that not too long the project will be completed and all will converge again to witness its commissioning. “It is a very good development as an additional berth will provide the congenial space for more ships to berth at the port,” he expressed optimism.

In her address as the Guest of Honour, the First Lady, Dr. Fatima Bio, stated that she is present for two main reasons as a product of  Her Majesty the Queen of England and because NSTB has been one of the biggest supporters of the Hands Off Our Girls Initiative. She stated that when she started the Hands Off Our Girls Initiative some thought it was a gimmick stating how today it is impacting positively as is evident in the retention of girls in schools for longer periods as opposed to the past. The First Lady talked about how the implementation and completion of the project will positively transform the lives of residents within the community, help the economy to grow and provide job opportunities.

“This project implemented by NSBT is a validation of the Government’s commitment to deepen development,” she stated adding that throughout the outbreak of COVID-19 no company departed from the country attributing such to the proactive stance taken by the Government to combat the spread of the virus. She reiterated that NSBT’s move certifies that the Government and SLPA are doing fantastic works. She commended the Management of SLPA for providing the enabling environment for NSBT to go ahead with the project.  The First Lady also extended appreciation and thanks to all the staff of SLPP.

Earlier  the NSBT Group Director, Guy Wilkes said in a statement that  NSTB is involved with terminal management services and the discharge from vessels of bulk, dry and free flowing commodities such as grain, rice, and fertilizer as well as raw materials such as Coal utilizing the Group’s highly experienced and trained personnel.

“The Group provides bulk discharge and bagging services in a large number of ports around world and also has expanded into logistics and warehouse management,” he revealed adding that the Project, when completed, will be very advantageous in aiding their work and will benefit the country tremendously.

In his statement, the Project Consultant, Gordon Rankine, mentioned how they assisted NSBT to develop and plan the project adding that the main benefit that will accrue to the country will be seen in the increase number of ships that will be berthing at the Queen Elizabeth 11 Port. He dilated on some of the challenges that have been encountered so far including escalation in the prices of building materials or equipment that are used, constraints in travelling further assuring of support from his team in order to ensure that everything works out well.

General Manager of SLPA, Dr Abdulai Fofana said he is delighted to be part of the programme. He noted that the implementation of the project by NSBT will definitely inspire confidence in potential investors and raise the profile of the country internationally. He informed that the Port has now become very serene and strike free attributing such to sound administrative and prudent management amidst various challenges faced.

The SLPA General Manager also highlighted how increased coordination will lead to sustainable policies and activities maintaining that Sierra Leone has the 3rd natural harbour in the world through which there are major shipping routes. He stated that with sound initiatives the harbour could be transformed into a shipping hub. He revealed how there are seven berths at the port and disclosed of how they relinquished some of SLPA’s functions to other entities who have concessions to operate at the Port one of which is NSBT adding that the relationship with the company is cordial.

“I am encouraging other entities to invest in other sectors just as NSTB has done,” he stated and mentioned some of the benefits which the Project, when completed, will bring.

Guilbaud Laurent, the Project Contractor, informed of the mobilization of equipment and manpower to the project site further expressing hope that after implementation the Project will bring wealth and happiness to the people of Sierra Leone.

On his part, the Member of Parliament , Constituency 121 Hon Miniru Lansana said NSTB has made him a happy personality as he has been sleeping soundly for the simple fact that whenever  NSBT wants to implement a project they do not give him cash to do so but rather the company undertakes the implementation freeing him from pestering. He commended the company for constructing a standard Police Station within his Constituency, which he said has helped reduce crime rate. The Member of Parliament also lauded the company for enhancing sanitation through support to waste management and education within communities in the Constituency. He implored for consultation in order to recommend educated and qualified residents of the Constituency for any job vacancy within the company.

Representative of the Chairman of NCP, Saffura Rogers, who happens to be the Executive Secretary of that institution said the implementation of the project by NSBT is a response to President Bio’s call for investment. She underscored that the realization of the President’s vision will be seen in the implementation of meaningful projects and revealed how they will be providing monitoring and oversight functions for the project.

Deputy Minister of Transport, Rex Bonapha, expressed the view that with the expansion by NSBT more vessels will be berthing saying such will place the country at a vantage position. He extended thanks to NSTB for making the dream and vision of President Bio become a reality maintaining that with more investments and improvements by entities or individuals it will be a win-win situation.

The climax of the programme was the turning of the sod by the First Lady, Madam Fatima Bio at the project site.

Nectar Group Limited (NGL) is a global market leader of specialist bulk cargo handling services at ports and terminals across the world.

The history of NSBT in Sierra Leone can be traced back to the late 1980’s when the company pioneered Bulk/Bagging operations at Freetown under the USAID Title II programme and pioneered logistical savings for importers of rice and other basic commodities.

Since 2015 investment in Sierra Leone is focused around the Freetown Port which serves as the major logistics hub for Sierra Leone’s imports and exports. The Port is an essential component of the Sierra Leon economic prosperity and is invaluable for the local economy.

It has significant commercial advantages but, however, its potential has yet to be fully realized

Highlights of the Project include designing and constructing a new deep-water jetty with a new berth and refurbish existing berth to enable a larger class of vessel size (up to Panamax size) to call at Freetown.

Nectar Group currently has a 21-year + 7-year option concession with the Government of Sierra Leone and has been operating in the port from September 2015.

The growth objectives will be an increase in easing shipment, competitiveness, viability and profitability of the port facilities and attraction of  greater international traffic.  It will also provide modern facilities and expand the existing berths and quayside space,  increase import capacities and enable more cost-effective shipments by having deeper draft, more efficient unloading systems and a reduction in operational costs for importers and ship-owners alike.

NSBT will continue to provide services including unloading of vessels to storing of cargo in the port warehouses, as well as maintenance of all terminal equipment.

The company regards social impact as important as having an economic impact . So far NSBT has donated fire engines to the Sierra Leone Ports Authority in 2017 along with uniforms and ancillary fire-fighting kit, partnered with “Street Child Sierra Leone” in 2017 to sponsor 25 homeless children in the Cline Town area of the city in order to get them off the streets and into long-term education, built 6 classrooms, the Headmaster’s office and Staff Room at the Muslim Brotherhood Primary School (Cline Town) in 2017.

In 2018, refurbished classrooms at the Bishop Crowther Primary School and refurbished Freetown Cheshire Home (Cline Town) and in 2019/2020, support to Freetown Cheshire Home (Cline Town), the Sierra Leone Ports Authority Football Club and donation towards the construction of a Vocational Centre along with local COVID- 19 initiatives, in 2021, NSBT funded the construction of the new Kanikay Police Station in Cline Town, continues to support the First Lady’s foundation and since 2017, NSBT has committed funds in excess of Le 2 Billion on local community projects.