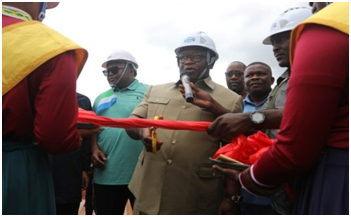 The commissioning took place on Tuesday 24th May 2022 during a separate event after the President earlier unveiled a Le 5.3 billion paid into the accounts of the Community Development Agreement (CDA) fund by Kingho Mining Company, a subsidiary of Leone Rock Metals. The fund is 1% of annual revenue made by the company during its operation at the mines.

Speaking during the commissioning ceremony at the Train Load Out (TLO), Jay Chen, Deputy General Manager of Kingho Railway and Port Company said when the company took over in 2020, the rail system was not operational. He added that the company made enormous efforts and invested a huge sum of money for the restoration of the railway facilities.

Jay Chen added that the commissioning is significant because it is the first time locomotives have been imported into the country in ten years. He said it is important to note that his department is gender sensitive as a result they currently have female Sierra Leonean train drivers.

He assured that the railway department of the company also plans to hire more locomotives and upgrade the railway in the future.

It is worth noting that the locomotive is a rail transport vehicle that provides the motive power for a train.  A single locomotive has the capacity to pull 30 wagons which are used to transport iron ore from the mines to the port. So far, the train sets 112 wagons to 4 locomotives and 90 wagons to 3 locomotives.

The commissioning of three additional locomotives by the President will improve the haulage capacity of the company to achieve a target of 25,200 tonnes daily and 9 million tonnes annually. 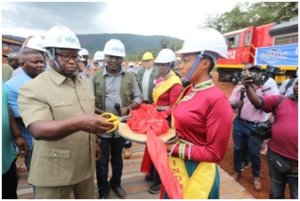 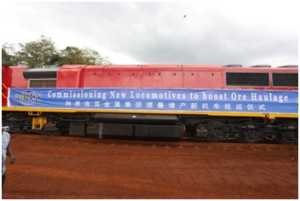