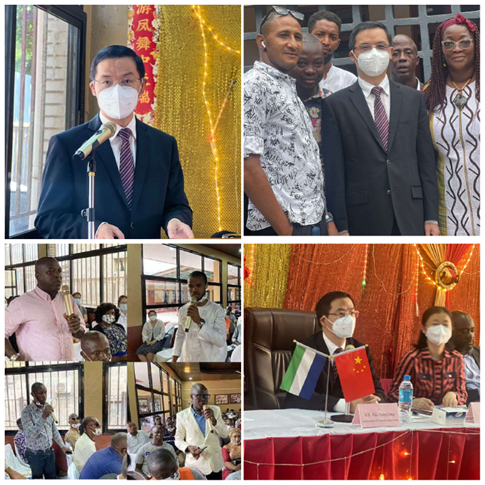 The Chinese Embassy hosted its third Information Salon in this year, 2022, on Wednesday 8 June, 2022 at the China House, Freetown marking the first to be held physically as all the previous ones were held virtually. It was geared towards exchanging views on contemporary international situations, China’s development, its foreign policy as well as the current status of China-Sierra Leone relations.

Following statements made by the various representatives of the various Sierra Leone-China Friendship Organizations, the keynote address was delivered by the Chinese Ambassador to Sierra Leone, HE Hu Zhangliang. He commenced by pointing out that facing the complicated international situation and new challenges and risks, China has all along stood on the right side of history and on the side of human progress, international equity and justice as well as the vast developing countries.

He furthered how China has chosen cooperation over confrontation, openness over isolation, mutual benefit over zero-sum game, and equality over power politics and bullying.

“China opposes all kinds of unilateral sanctions and long-arm jurisdiction,” he asserted maintaining how certain countries believe in power politics, try to provoke camp confrontation and attempt to drag the world into a “new cold war”, seriously threatening world peace and security.

Ambassador Hu intimated how China has injected tremendous impetus and provided strong support to world peace and development adding that the common modernization of more than 1.4 billion Chinese people is a great progress for mankind.

“China has sent more than 50,000 staffs to UN peacekeeping operations, being the largest peacekeepers provider among the permanent members of the UN Security Council and the second largest funding contributor to UN peacekeeping missions,” he proudly informed the audience adding that China has provided more than 2.1 billion doses of COVID-19 vaccines to the International Community and making active efforts to fill the “immunity gap”.

“China will continue to follow the development path with its own characteristics and continue to be a builder of world peace, a contributor to global development and a defender of international order,” he said.

Ambassador Hu intimated how the Embassy appreciates the Sierra Leone-China Friendship Organizations for their important contributions to the development of China-Sierra Leone relations adding that China and Sierra Leone should cherish and make every effort to consolidate their time-honored friendship, vigorously enhance China-Sierra Leone cooperation and jointly achieve common development.

Representatives of the Sierra Leone-China friendship organizations spoke highly of China’s rapid development and the long-term sincere help China has rendered and still continues to render to Sierra Leone. They affirmed that their organizations will stand in firm solidarity with China and continue to work on deepening the exchanges and friendship between the two countries and its people.

Hindolo Gevao, Chairman of the Sierra Leone China friendship Society, said it behooves all to stand up and defend the good name of China against negative publications adding that they will continue to pursue legal action to reclaim some of  the encroached portions of land, were China House is situated, that has been trespassed on until justice is meted out.

Chairperson of the Sierra Leone China Friendship Association, Onike King, also dilated on negative and unfounded publications against China also disclosing of having a branch in Makeni with moves to expand into other districts as well as embarking on the cultivation of groundnuts and vegetables at Waterloo. She further revealed about the organization of an upcoming competition for a designated number of children who are learning Small-Small Chinese stating how the children are now reading poems and singing songs in Chinese.

President of the Sierra Leone China Foundation, Mohamed Kamara, said since 1971 when China and Sierra Leone entered into bilateral relations there have been immense benefits to the country evident in tangible infrastructural developments made by China.

He however pointed out that telling the real Chinese story has been lacking and therefore called for all to go beyond making references to Chinese phones, products and point out significant developments that have been rolled out.

Alhaji Javombo, the President of the Sino-Sierra Leone Alumni Association, informed that theirs is an association of academics which was formed in 2013 now having a membership of over 500 grandaunts. He continued that they undertake information sharing to assist those who want to travel to China for the first time, provision of translation services and counter baseless media attacks against China. Javombo asked for more support to enhance the implementation of their activities.

The highpoint of the programme was a discussion session on some hot topics relating to international issues such as the standoff between China and Taiwan, the Uyghurs etc and it was chaired by the Chinese Ambassador to Sierra Leone, Hu Zhangliang.