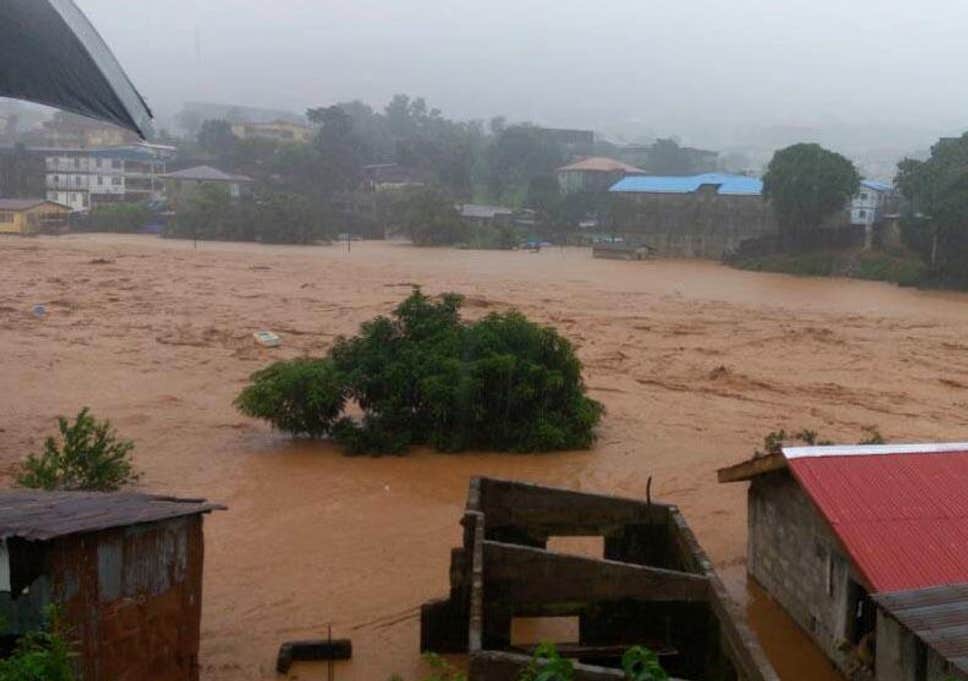 Freetown, the capital city of Sierra Leone has been experiencing persistent torrential rains from late May 2019 to August 2019. The highest recorded incident was the August 2nd rainfall causing associated impacts, including flooding in low lying areas as well as new episodes of landslides on low scale in the eastern part of the city.

Giving an update on the August 2nd flooding in the country, the Office of National Security (ONS) has revealed that the incident left 985 households completely damaged and more than 5,381 people rendered homeless.

“The number of households that were completely damaged in the West Rural included Tombo 135, Kissy 39, Kerry Town 17, Madina 16, John Obey 6, Macdonald 1 and Gbolaoh 7.

“However, we are seriously considering relocating these people with well-planned and coordinated effort,” Mr. Mansaray added.

Mrs. Philomena Isatu Turay of the same department said ONS and its partners have been engaging and training people across the country on disaster risk reduction. She noted that ONS has rolled out preparedness plans to engage stakeholders in disaster prone areas in the Western Area. She said they are also going to train trainers and supply them with cleaning tools to clean the drainages within their communities. She added: “We will continue to engage Sierra Leoneans on disaster preventions.”

Additionally, the main road to the city’s centre was rendered impassable due to the flood waters, heavily constraining vehicles and pedestrians having to find alternative routes. The city continues to experience more rainfall which may cause more flooding and spread to additional communities, which would further increase the number of affected people.

The floods and landslides were triggered by a heavy and continuous downpour that was experienced on 1st August 2019 from 10:00pm until the next morning on 2nd August 2019. The raging floods resulted in substantial destruction of houses, road networks and destroyed the livelihoods of approximately 896 households (5,381 people) according to the results of the rapid needs assessment (RNA) conducted by the Office of National Security (ONS) in collaboration with other humanitarian actors in disaster management.

The Office of National Security reported that the floods have already claimed a number of lives and more people, especially lactating mothers, pregnant women and children, are likely to face the risks of illness from water-borne diseases. Owing to stagnation of dirt and pool of ponds it is likely that malaria will be on the increase. This is a potential threat to people, especially those living in the affected communities.

The abundance of contaminated water with limited WASH facilities are a basis for majority people living in the affected communities to be exposed to diseases such as diarrhoea and cholera.

In addition, the flood has undermined the livelihood opportunities of people in the affected communities as it destroyed crops as well as submerged food stuff in some of the affected households, which consequently results in malnutrition, especially for children under five years of age. Based on this background, there is a need for a multi-stage response, linking relief and recovery interventions for the affected populations.

It is on account of these details that Sierra Leone Red Cross Society and its Movement partners including IFRC, BRC and FRC are exerting efforts to embark on life-saving activities (assistance programme). SLRCS will continue to monitor and assess the flood situation as it evolves, remaining agile for further action to save lives.