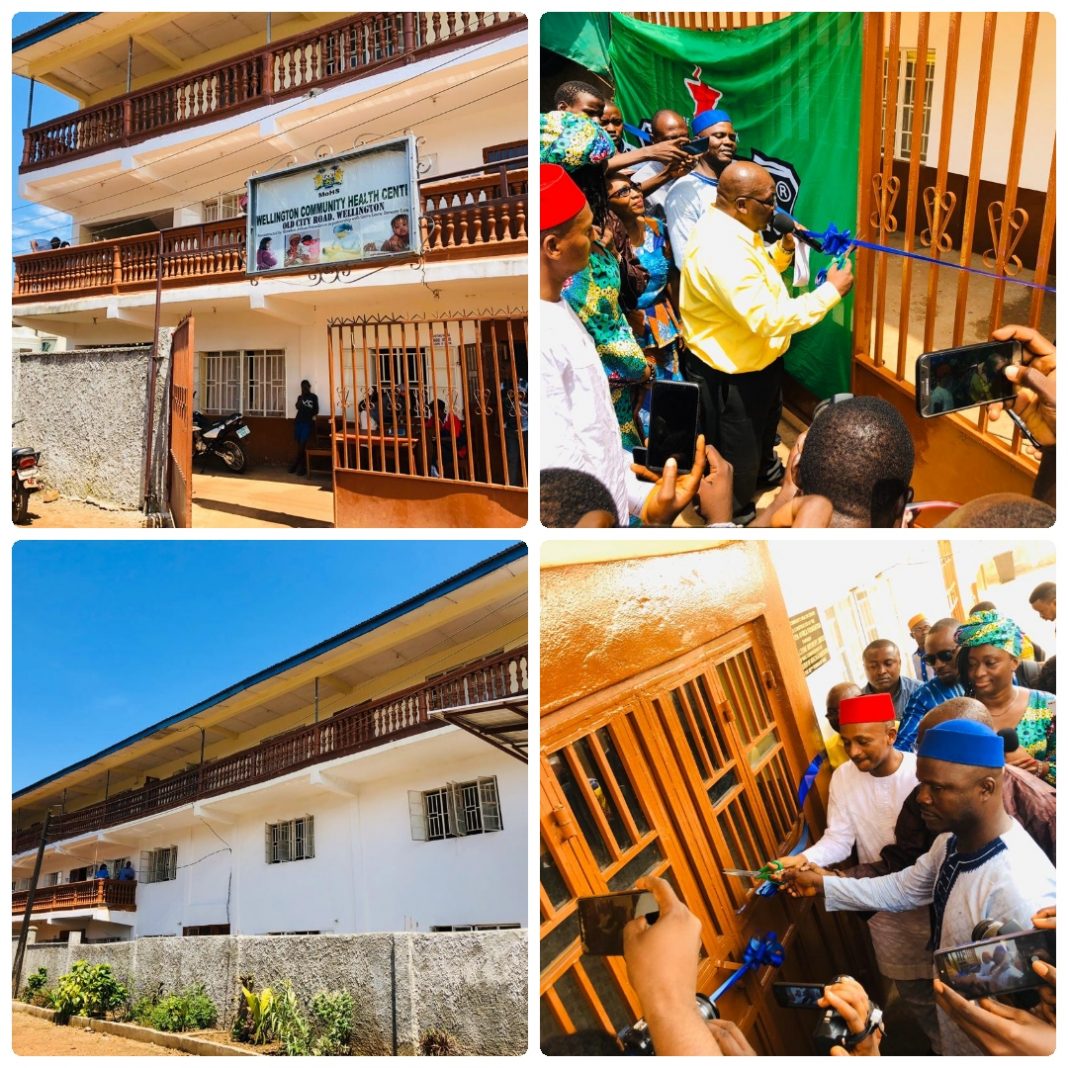 In a bid to accomplish its corporate social responsibilities, the Sierra Leone Brewery Limited through Heineken Africa Foundation (HAF) on Friday 28th February finally fulfilled the dream of the people of Wellington with the newly-constructed Wellington Health Centre going into operation.

The official opening of the Wellington Health Centre attracted indigenes and prominent personalities and was co-chaired by the Marketing Manager of Sierra Leone Brewery Limited, Madam Aminata Kassim Carew and Unisa Conteh.

Speaking on behalf of Sierra Leone Brewery Limited, the Corporate Affairs Manager – Albert Ojo Collier, started by highlighting the embryonic background of the Wellington Health Centre Project that was initially planned for only rehabilitation. He added that due to the felt need of the Wellington people, they thought it plausible to do a demolition of the existing single floor building to ease the construction of a two-storey building with an increased capacity and facilities to include Antenatal Clinic, Family Planning Unit, Under Five Unit, Nutrition Unit, Drug Store, Reception Unit, TB Unit, Laboratory Unit, HIV Unit, Births and Deaths Registration Office and many more.

He informed his audience that the new health center would serve an estimated 50,000 people; servicing the needs of pregnant, lactating and under five children and other categories of patients.

He added that he is confident that the new facilities at the hospital will thoroughly improve the quality of the service and infrastructure for both patients and staffs in the years to come.

He explained to his audience that they commenced their engagement with the Wellington community people for the health center in 2010 with the first ever HAF programme by donating maternity equipment, computers followed with an ambulance by 2011. He went on to state that this was supported in 2015 with another extension, with the provision of another brand new ambulance during the Ebola crisis.

He further explained that the proposal was actually submitted when CHO, Mr. Kposowa, collaborated with the Clinic Manager of Sierra Leone Limited, Mrs. Agnes Lye Fornah and other authorities.

He said he was present when the entire hospital unit was transferred into the new building in 2019 from the temporary location of the community center and they all know that the hospital has been operating for few months now.

He said the new hospital development will be of great benefit to the local Wellington community both in terms of the services that it provides and also with regards to employment opportunities that it will offer. According to him, with the improved infrastructure, there are new ways of working which will also assist the hospital in attracting the brightest and the best to come and work in what is now generally recognized as one of Freetown’s best health centers.

Mr. Collier said the hospital has now been expanded with an increased space for patients and accommodation for Midwife and Community Health Officer among others.

He said the first approved fund was EUR 100.943, which couldn’t complete the structure, after what was supposed to be a rehabilitation, turned out to become a complete reconstruction from the foundation. In addition, he said the first funding wasn’t enough as final aspects to complete the work which included roofing, tiling, plumbing, installation of doors, windows, electrical, ceiling, labor, supervision expenses and general finishing needed to be done.

In addition because of the increase in the cost price for building materials in 2014 as opposed to previous estimates, resulted in the issue of limited resources to conclude the project, he said. He maintained that an additional fund of EUR 46,183 was then approved by HAF after the Ebola virus disease in the country.

He informed his audience that the hospital has now been completed with a two storey structure with increased capacity and facilities which include:

. Births and Deaths Registration Office, among others.

The Parliamentary representative of residents of Constituency 115, Hon. Alpha Amadu Bah, in a delighted mood, started by heaping profound thanks and appreciation on Heineken Africa Foundation (HAF) and Sierra Leone Brewery Limited for their unwavering contributions over the years to the people of Wellington, prior to his becoming Member of Parliament for Constituency 115, spanning from the donations of maternity equipment, computers, followed by an  ambulance for the second time during the brink of the Ebola crisis in 2015.

He however called on the Government to be giving favourable tax concession to local industries, especially Sierra Leone Brewery Limited, owing to the fact that they are partners in nation building as their handwork is quite conspicuous in almost all parts of the country.

Hon. Lawyer Bah concluded by appealing to the Ministry of Health and Sanitation for their intervention in providing the necessary equipment, especially hospital beds, as the project only covers construction.

The program was climaxed by a vote of thanks given by Councillor Luckyn Mordings Mansaray, the host councillor of Ward 406.