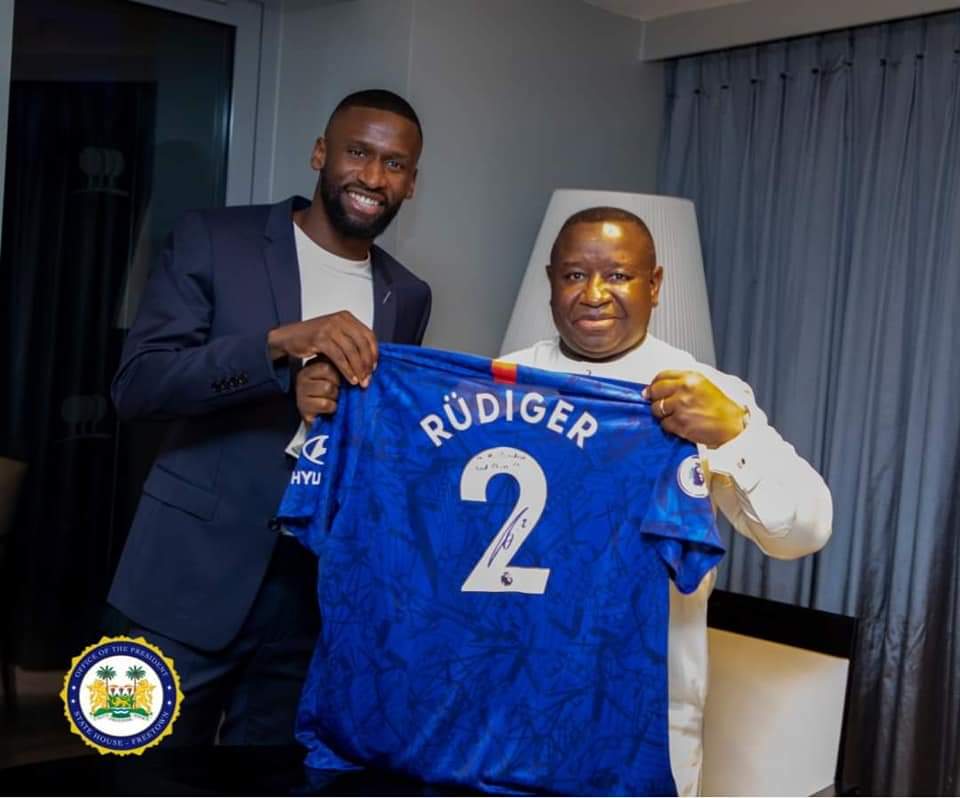 In London where His Excellency President Dr Julius Maada Bio is currently attending a conference he met with Antonio Rüdiger on the margins of the UK-Africa Investment Summit in London and the outcome of that meeting  yielded Le 1 Billion (USD 101,000) for Sierra Leone’s Free Quality Education initiative.

The German professional footballer, who plays as a centre back for Premier League club Chelsea donated the money as his modest contribution to the President’s flagship project, which aims to support over two million children in primary and secondary schools in the West African nation. He commended President Bio for his commitment to human capital development, adding that it is the bedrock for every national development.

Born to Sierra Leonean parents in Germany, Antonio’s parents fled Sierra Leone during the war and resettled in Germany. Rüdiger assured the President that he is committed to supporting his Government’s effort at rebranding the natural resource-rich country with huge potentials for investments.

“Sierra Leone is my home. I’m not the talking type of a person, I am about action. You can count on us and do not hesitate. We are here to support your vision and agenda, especially on education. I am ready to take on my responsibility to change the narrative and image of Sierra Leone,” he said.

Sierra Leone’s Minister of Education, Dr Moinina David Sengeh thanked Rüdiger and his team for the confidence they had reposed in the Government and the support to the free quality education. He explained that every fund is directed to meet strategic plans of the Ministry, adding that every decision made for the allocation of funds was also informed by data to enhance delivery and achieve results.

First Lady, Fatima Maada Bio, projecting the Office of The First Lady, Republic Of Sierra Leone, explained the need for every girl to be educated in Sierra Leone, citing major strides that the Government is making to increase school enrolment and retention for girls. The ‘Hands Of Our Girls’ campaign, she said, was designed to provide support and protect the girl child to stay in school. She expressed her gratitude, on behalf of girls in Sierra Leone, for Rüdiger’s support to the Free Quality Education. She also asked him to not only be a brand ambassador for Sierra Leone, but to also lend a voice to the campaign.

On his part, President Bio said: “The narrative about Sierra Leone must change and it is the duty of every Sierra Leonean out in the diaspora to come on board the rebranding process”. He also expressed appreciation for the donation to support free quality education. While assuring Rüdiger that the funds would be transparently utilised for the intended purpose, he also welcomed him and his team to audit the proper use of the funds at any time.

President Bio honoured Rüdiger as one of Sierra Leone’s brand ambassadors, reiterating the fact that Sierra Leoneans around the world were coming back home, keen on being part of the rebranding process. He assured the benefactors that their support would further strengthen the achievement of a developed human capital of Sierra Leoneans and capacitate them for the fourth industrial revolution.