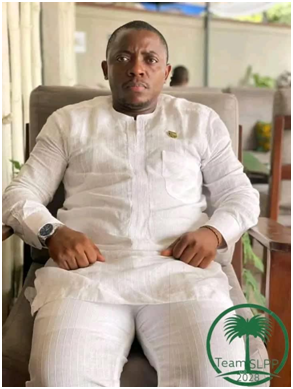 After traversing the length and breadth of this country, motivating and inspiring residents to turn out in large numbers to register in the just concluded voters registration exercise, Chief Kadiru Kaikai has also concluded meeting with   Party Stakeholders, urging them to work together as a team in order to secure landmark victory for President Bio come to the 2023 general elections.

Now with the Electoral Commission of Sierra Leone pronouncing that the proportional representation (PR) system will be used to conduct the forthcoming General Elections, Chief Kadiru has assured that he would keep traveling to districts, constituencies, and wards to meet with key party stakeholders and talk about how important it is for party members to stick together ahead of 2023.

Such laudable move by Chief Kadiru Kaikai, many have said, is geared towards  appeasing  some key stakeholders who have worked hard for the party from 2012 to the 2018 elections but feel they have not receive any recognition or benefits from the party.

Chief Kadiru Kaikai acknowledged that it is extremely important to identify with committed SLPP members who will run the party’s operations and ensure that its presidential candidate, Julius Maada Bio, wins in most parts of the country.

He emphasized the need for unity among party stewards and urged them to love one another and always work for the progress of the party and President Bio.

Stakeholders present in the meetings commended Chief Kadiru Kaikai and his team for their efforts and also assured him of their readiness for party campaign activity and delivery of SLPP candidates across the board in the forthcoming elections.