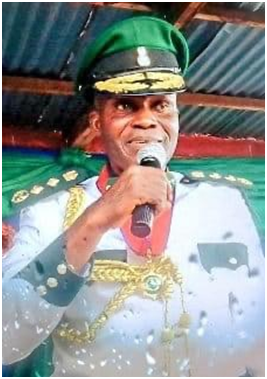 The newly appointed Director General of the Sierra Leone Correctional Service has acclaimed himself as the “people’s Director General”, on the basis that he is loved and admired by most officers (both retired and active).

Mr. Ahmed Turay received huge support from Members of Parliament when he appeared in the Well of Parliament for approval. It was observed that his voluminous years of experience spanning over three decades is enough testament of the fact that he will succeed in his new appointment.

When he joined the Department in the early 90s, he had just left the classroom as a teacher. At the time, most university graduates shied away from the Prison job, because it was viewed by many as a work place for the never- do- wells. Mr. Turay disregarded every discouraging advice from friends and family alike, and stayed focus on his dream of joining the Prison Service then.

After his recruitment, he immediately started work. He served in the training school, and was later sent to manage different Prisons in the provinces. There came a time when he was needed at Headquarters to serve as Staff Officer of the Department. This new role meant he was to act as ‘hand’ and ‘voice’ of the then Director of Prisons. He was Secretary General of the Department. He served in that capacity for ten years plus, and is still reckoned as the longest serving Staff Officer. From that, he withdrew from work and went into the academic cave again- this time, to study for his Master’s Degree at Fourah Bay College, University of Sierra Leone. He recounts that the then Director of Prisons did not want him out of his sight because of the diligent work he was doing. It was believed that it would be hard to find his replacement. He nonetheless pursued.

Having returned from his academic pursuit, he was posted to the provinces for the second time, just that this time, it was to serve as Regional Commander. As his experience grew apace, he was withdrawn and returned to Freetown to serve as Regional Commander of the Western Area. This meant he was to supervise all SLCS facilities in Freetown. His managerial prowess soon became visible in his boss’ eye so much so that he was transferred from the Western Area Regional Command Office to the Human Resources Office to act as the Director there, and later posted as Director of Security and Operations. One year before he was appointed as DG of the SLCS, he had served as Deputy Director General under his predecessor – Joseph Lamboi.

Also, what more could be wanted in a leader than selfless service? The new DG has loads of that in his invincible carriage. This man is a leader and not a boss. It means, he does not shout at his subordinates; he does not disrespect anyone; his door is always open to any officer who so much as knocks; he listens to what everyone has to say; when in doubts, he does not pretend to know the answer; and he seeks counsel from professionals working with him. Mr. Turay does not want to know which part of the country one comes from; in fact, that is a question he will never ask anyone. All he cares about is studious and diligent work from his colleagues. Anyone who fits into this philosophy, he draws closer and places him/her in a position of trust. On top of all that, he does not regard anyone as a subordinate; everyone he works with is his colleague. He is indeed the people’s man!

In addition, Mr. Turay has reformative packages which he intends to roll out for the inmates (prisoners). He firmly believes that offenders are supposed to be brought to their senses and not to their knees. He invites every well- meaning Sierra Leonean and even foreigners to join him in reforming inmates, so that when they are released they would not return to their offending ways. “It is not an event,” he says, “it is a process”. He added that officers’ welfare will be taken more seriously than ever under his tenure.

The new DG, with full support from the SLCS management body, has indicated that he wants inmates to be involved in meaningful agricultural activities. He intends to ensure the SLCS becomes semi- food self- sufficient before his tenure as DG runs out.

In his maiden Consultative and Management Meeting as Director General, Mr. Turay pleaded with colleagues to put aside all differences and put hands on deck to work with him “day and night”. He owned up to the fact that he might not succeed if colleagues do not work concertedly to ensure that the SLCS is re- placed on the chart of recognition.

The DG assured that he will revive all the activities that once placed the SLCS on the front seat of people’s mind. Notable one include: the University of Makeni & SLCS partnership and the Miss Corrections Beauty Pageant.