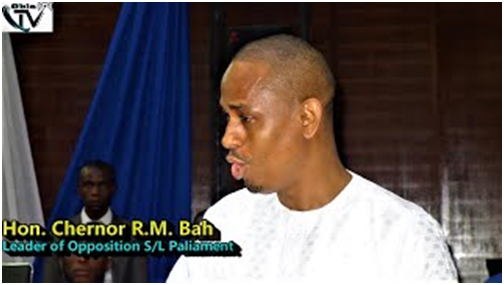 The Leader of the Opposition All People’s Congress (APC) Party in Parliament, Hon. Chernor Maju Bah has on Monday, 24th October, 2022 stated that he has read with consternation a Press Release dated 21 October 2022, issued by the Electoral Commission of Sierra Leone (ECSL), in which it was stated that the President of Sierra Leone, His Excellency Julius Maada Bio, has directed the ECSL to conduct next year’s multi-tier elections using the District Block and Proportional Representation (PR) system.

According to Hon. Chernor Maju Bah such is a serious constitutional breach that will significantly reverse the gains some have made in strengthening democracy in post-war Sierra Leone.

He revealed that when the idea of using the PR system was initially introduced in Parliament in the Public Elections Bill 2022, it was heavily criticized and rejected by Members of Parliament, leading to its eventual withdrawal.

The opposition leader maintained that amongst members of the public, the Civil Society and the Media, the proposed PR system also generated considerable controversy, given its potential to limit the participation of citizens in the country’s democratic process.

He continued that it is therefore disappointing that after its rejection by Parliament, the Executive would still give directives for the system to be imposed on the people of Sierra Leone.

“It is even more disturbing that such a change of the electoral system is being attempted on the eve of the multi-tier elections,” he lamented adding that using the PR system in place of the constituency system would amount to taking away the rights of the people to choose their representatives directly and hand that power over to political parties.

He stated that while he acknowledges that the Constitution of Sierra Leone (Amendment) Act, 2001 Section 38A of the 1991 Constitution, grants ‘THE PRESIDENT discretionary powers to consult with the Electoral Commission and direct them, to conduct elections on the basis of the ‘EXISTING DISTRICTS’ in a manner to be known as the district block representation system instead of constituencies, the same amendment [Section 38A. (1)] specifies the condition precedent to the exercise of such discretion and directive:

“Where under any law for the time being in force, a date for a general election of Members of Parliament has been appointed but constituencies have not been established in accordance with subsection (3) of section 38 for the purposes of such election, …….”

Hon. Chernor Maju Bah stated how inarguably the condition precedent to the exercise of such Presidential discretion is non-existent maintaining that as it is, constituencies already exist and by Section 38 subsection (4) of the 1991 Constitution, the Electoral Commission SHALL only review such constituencies at intervals of NOT LESS THAN FIVE YEARS and NOT MORE THAN SEVEN YEARS.

He argued that it is still less than five years since the present constituencies were established, taking into consideration Section 38 subsection (5) of the said Constitution:

“Where the boundaries of any constituency are altered in accordance with the provisions of this section, that alteration shall come into effect upon the next dissolution of Parliament, after the alteration has been approved by Parliament.”

The Member of Parliament said, therefore, it is shocking that the ECSL has, without consideration of the country’s laws and based on the dictates of the Executive, decided to switch to a PR system.

He said even more shocking the ECSL has gone further to state that it will also conduct the local council elections on a District Block/Proportional Representation System.

The opposition leader maintained that those pronouncements by the Electoral Commission and its pandering to the whims and caprices of the Executive have the tendency to undermine the independence and credibility of the ECSL.

He said in view of the above reasons and for the protection of the supremacy of the Constitution, he is calling on His Excellency the President, to reverse his directive to the ECSL.

Hon. Chernor Maju Bah pointed out that the primary right of the people of Sierra Leone to elect their Parliamentary representatives is through constituency- based elections, as enshrined in the Constitution.

“I already know that the amendment of the Constitution then, which allows for such exercise of discretion by the President, was necessitated by the prevalence of a civil war in Sierra Leone, and the impossibility of establishing constituencies across the country,” he said.

The Leader of the Opposition All People’s Congress (APC) Party in Parliament said circumstances have since changed, the country is no longer at war, nor is any part of the country inaccessible.

He said it is also important to note that after the end of the civil war, the then President immediately reverted to the Constituency Based Elections system in 2007, as it promotes participation and democratic good governance.

The Parliamentarian stated that tied to the above, constituencies already exist across the country, and they have held three successive successful general elections using the constitutionally prescribed Constituency system adding that it would therefore be illogical, unprecedented and unconstitutional to revert to a PR system whose introduction was necessitated by the conditions of a raging war in the country.

Hon Chernor Maju Bah concluded by stating that he would like to assure the public that should they sense a desire to not reverse that decision, they will use all legal remedies to ensure that the rights of the people of Sierra Leone are not denied them, and that provisions of the Constitution are upheld.