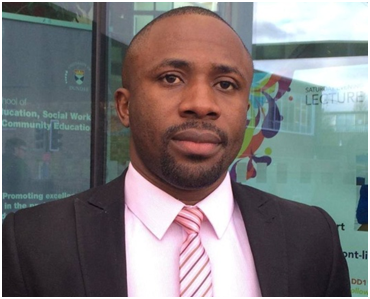 In a Press Statement dated 23rd October 2022 issued by the Executive Director of Legal Link, Lawyer Rashid Dumbuya Esq, he said the Non-Governmental Organization has followed religiously the tweet, press release, and interview of the ECSL boss via BBC and feels enthused to make an open call for censorship of the ECSL boss over his cavalier attitude and omission to carry out a public duty as provided for by law.

He pointed out that before delving into the reasons for their call to have him sanctioned, it is vital to emphasize that the conduct of boundary delimitation exercise which ultimately leads to the division of the country into constituencies and wards is a constitutional duty placed upon ECSL under Section 38 of the 1991 constitution of Sierra Leone.

Lawyer Rashid added that no justifiable reason, therefore, exists as to why ECSL should have reneged on such a constitutional duty owed to the people of Sierra Leone and thus paving way for the President to direct for the conduct of the 2023 elections to be based on a PR system (district block system).

“It is vital to also remind the public that Sierra Leone’s electoral system for the conduct of Parliamentary elections has largely revolved around two types; the First Past the Post (constituency elections) and that of Proportional Representation otherwise known as District Block System,” he continued adding that the 1991 Constitution of Sierra Leone under Section 38 (1) makes the First Past the Post electoral system as the mandatory choice for the conduct of Parliamentary elections by ECSL and the country has implemented same in three successive democratic elections namely 2007, 2012 and 2018 elections.

He furthered that notwithstanding the above provision, however, Proportional Representation has also been made use of in Sierra Leone at least in two democratic elections namely 1996 and 2002 elections.

The Executive Director maintained that by Section 38 (A) (1) of the Constitutional Amendment of 2001, Proportional Representation was made part of the country’s electoral system as a default option to be resorted to only where “a date for a general election of members of Parliament has been appointed but constituencies have not been established in accordance with Subsection 3 of Section 38 of the 1991 constitution for the purpose of such election.”

That Constitutional Amendment, he pointed out, introduced during Sierra Leone’s war period was justifiable since there was an acute absence of credible population data coupled with the challenge of accessibility to many areas of the country at the time for the delimitation of constituencies and wards, hence, the basis for which the Proportional Representation system was introduced in the 1996 and 2002 elections respectively.

He continued that today, in peacetime, just about 8 months to the 2023 general elections, ECSL had made a representation to the President that they are unable to conduct the boundary delimitation exercise and divide the country into constituencies thus paving way for the President to direct the re-introduction of the Proportional Representation system as the modus operandi for the conduct of Parliamentary elections in 2023.

According to the Legal Link Boss listed therefore below are 10 strong reasons as to why LEGAL LINK believes that the chairperson of ECSL should be sanctioned with immediate effect from the institution:

That it was the ECSL boss that represented to the President that ECSL is unable to carry out the boundary delimitation exercise that will lead to the division of the country into constituencies and wards.

He said from his interview at the BBC and the Press Statement issued by ECSL dated 21st October 2022, it is clear as crystal that it was ECSL that represented to the President their inability to conduct the boundary delimitation exercise that could have divided the country into constituencies and wards.

That inability, he said, precipitated the President to then issue out a directive to ECSL to conduct the 2023 elections using the district block system.

2) The ECSL boss failed to engage the public, political parties and relevant stakeholders over ECSL’s inability to conduct a boundary delimitation exercise.

3) The flip-flop behavior of the ECSL boss poses a clear and present danger to the integrity of the ECSL institution.

4) The incessant delay by ECSL in carrying out the boundary delimitation exercise was willful and intentional.

5) ECSL’s boss reference to the August 10 violent protests as an excuse for not carrying out the boundary delimitation exercise is unpardonable.

LEGAL LINK notes also that the ECSL boss, in his interview on BBC referenced the August 10 violent protests as part of the reason for ECSL not been able to carry out the boundary delimitation exercise.

This excuse is certainly untenable and unpardonable particularly when it is construed that the violent protests of August 10 only lasted for a week. After that,  normalcy was quickly restored in the country with the curfew lifted within the shortest possible time.

6) ECSL still has time in their hands to do the boundary delimitation exercise if there’s good will.

8) ECSL’s boss introduction of the PR system in the forth coming elections via tweeter.

9) The non clarity of ECSL’s boss regarding the type of PR system to be adopted after its introduction.

10) The ECSL boss did not separate the various elections to be affected by the PR system in his press statement and BBC interview.

He said a cursory analysis of the interview of the ECSL boss via BBC and that of the ECSL press statement will leave everyone thinking that all 3 elections in 2023 ( Presidential, Parliamentary and Local Council elections) will be conducted according to the district block system.

According to him that is the case because no effort was made in both of ECSL’s media updates to emphasize that it is only the Parliamentary Elections that will be affected by the PR system.

He said hence, it is still unclear as to how the local council elections in particular will be conducted by ECSL especially so when wards and constituencies first needs to be determined for the effective conduct of lower level elections in the country.

The Legal Link Executive Director concluded by stating that it is vital to pinpoint that such an act by the ECSL boss and by extension ECSL sets a dangerous precedent in the electioneering process and the body politic in the future as it will further undermine public trust and puts the institution in a bad light before the international community.

He suggested that there is therefore a need for some strong measures to be taken against the NEC boss over his cavalier attitude and omission to perform a public duty as required for by law.

He maintained that the 1991 constitution clearly provides punishment for such omission by the Electoral Commission of Sierra Leone.

The Executive Director ended up asking the question, “ But will such a forceful introduction of the PR system receive validation from the Government, opposition political parties, CSO’s, election management bodies, right groups and the donor/ diplomatic community in Sierra Leone but answered, “Only history will tell.”