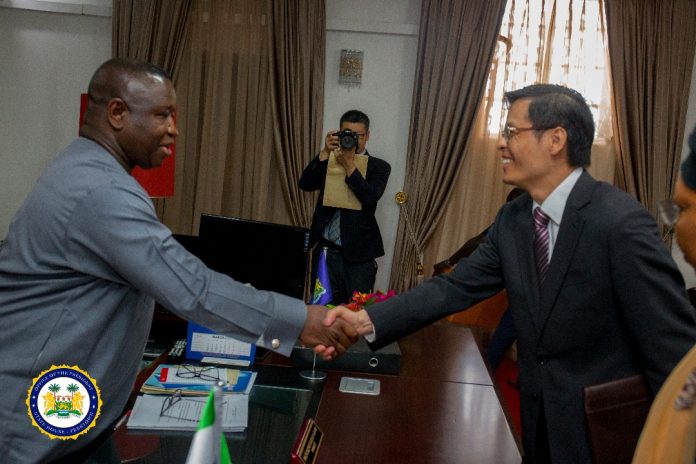 The newly-appointed Chinese Ambassador to Sierra Leone, Hu Zhangliang, has paid a courtesy call on His Excellency President Julius Maada Bio at State House in Freetown.

Ambassador Hu thanked the President for sparing his precious time with him, saying that he was meeting him to further discuss ways of strengthening the cooperation between the two countries. He said under the present leadership of the country they had seen great progress in all sectors of governance.

He noted that they also had a very good impression that the country is heading the right direction, citing the monthly cleaning exercise, the launch of the free quality education and the completion of the Sengbeh Pieh Memorial Bridge as efforts being made by the new Government to better the lives of Sierra Leoneans.

“I have followed your recent Independence and State Opening Speeches, which were indicative of your Governance strategies and political vision to develop Sierra Leone. I also noticed that you have instructed your Government to step up efforts in anti-corruption and in consolidating fiscal and economic policies which have given you the support from your people,” he said.

On his part, President Bio said he is happy that the new Ambassador had been able to move around Government Ministries so he could better understand what was going on in the Government and to see how they could come in as well. He said Sierra Leone enjoyed a very close relationship with the people and Government of China out of which the country had benefitted a lot.

“Now that you have visited the various Ministries you understand what are happening from different sectoral points of view. We cherish our relationship with China and will use every situation to express our appreciation. We want to say thanks for all the projects that we have completed and also for those in progress,” he said.