In his statement during the auspicious gathering, the Chinese Ambassador to Sierra Leone, Hu Zhangliang, said not long ago, the U.S. Secretary of State, Mike Pompeo, delivered a staggering and even ridiculous speech at the Nixon Presidential Library in California, claiming that the kind of engagement the U.S. has been pursuing has not brought the kind of change inside  China that President Nixon had hoped to induce and called for “a new alliance of democracies” to change “Communist China”.

He added that Pompeo’s speech reflects the deep-rooted Cold War mentality and arrogant ideological prejudices of some U.S. politicians. The Ambassador said fortunately not many people buy Pompeo’s argument, not even in the United States and that this is because his accusations of China are groundless, distorting the facts and anachronistic, either from a historical or practical perspective.

He stated that he believes their friends in Sierra Leone have their own fair judgment on what kind of country China is, what kind of party the Communist Party of China is and what kind of foreign policy China pursues.

Sharing his observations about China, he said, China is a country that is boasting of a long history of nearly 5,000 years with splendid civilization disclosing how the ancient Chinese created miracles such as the Great Wall and the Terracotta Warriors.

“The “Four Inventions” of ancient China, namely the gunpowder, compass, papermaking and printing had profoundly changed the world,” he underscored further revealing that the various schools of thoughts founded by ancient Chinese philosophers and scholars are still shining furthering that according to some historian economists at Oxford University, China’s GDP had been the largest in the world for a large part of human history and in 1800 accounted for 32.9% of the world’s total.

He said China is a country with strong perseverance, unyielding spirit and profound tenacity. The Ambassador intimated that following the advent of modern times about 180 years ago, due to the aggression of the Western powers and the corruptness of China’s feudal rulers, China was gradually reduced to a semi-colonial, semi-feudal society.

“Today, China has grown into the world’s second largest economy, the largest industrial country, the largest trader in goods and the biggest holder of foreign exchange reserves. China’s contribution rate to global economic growth has exceeded 30% for several years. 40 years ago, China’s per capita GDP was less than US$200, and today, it’s over US$10,000. More than 800 million people have been lifted out of poverty. People’s average life expectancy has been increased from 35 to 77 years. In 2019, China’s total GDP reached 14.4 trillion US dollars, accounting for more than 16% of the world’s share,” he disclosed.

Ambassador Hu said China pursues an independent foreign policy of peace, and is ready to enhance friendship and cooperation with all other countries on the basis of the Five Principles of Peaceful Coexistence, adding that China is the largest contributor of UN peacekeepers among the five permanent members of the Security Council and the second largest contributor of UN peacekeeping fund and that China actively seeks for political settlement of major regional hotspot issues under the UN framework, such as the Iranian nuclear issue, the Syria issue, the South Sudan issue, and the Korean Peninsula nuclear issue.

He said China will continue to follow the path of peaceful development, and will never seek hegemony or expansionism. China will always be a staunch force for peace in the world, he asserted.

He further disclosed that the Chinese side has provided 7 batches of medical supply donation to Sierra Leone, including more than 17,000 PPEs, 300,000 face masks, 32,000 testing kits, and a considerable amount of medical goggles, gloves, shoe covers, thermometer guns and ventilators etc.

The Ambassador also stated that the 3 Chinese medical expert teams have been working day and night on the frontline with their Sierra Leonean colleagues.

“The Chinese Embassy in Sierra Leone has been providing supports to various groups in Sierra Leone to the best of its capability. The major cooperation projects between China and Sierra Leone are proceeding on smoothly to support the latter’s socio-economic development,” he outlined.

Minister of Information and Communications, Mohamed Rahman Swaray, disclosed that China and Sierra Leone have enjoyed and continue to enjoy a deep traditional friendship and over the past 49 years, the bilateral relations has been developing smoothly with close high-level exchanges, deep political mutual trust and fruitful cooperation in economic, social and cultural fields.

He said in 2016, China and Sierra Leone established a comprehensive strategic cooperative partnership of which the Chinese Government always attaches great importance to Africa, adding that it has always been an important component of China’s independent foreign policy of peace to develop and strengthen the friendly relations and cooperation with developing countries, including Sierra Leone.

Swarray noted that China and Africa will remain each other’s best friends, reliable partners and good brothers, adding that President Xi Jinping made the remark on September 3, 2018 at the opening ceremony of the Beijing Summit of the Forum on China-Africa Cooperation (FOCAC) where he gave an in-depth summary of the history and current status of China-Africa friendship and pledged China’s firm determination and solemn commitments to Africa.

He maintained that vision of China’s Africa policy highlights basic principles which include:

He further revealed that his Ministry on Thursday 22nd August 2019, signed a concessional loan agreement of 30 million US Dollars with the Export- Import (EXIM) Bank of the People’s Republic of China and also a lending agreement between the Ministry of Finance and the Sierra Leone Cable Limited (SALCAB) in the Ministry of Finance conference room, Freetown, adding that the Loan Agreement for the National Fibre Optic Phase Il has a negotiated interest rate of one percent (1%) and is expected to be repaid in 15 years after a grace period of 5 years.

He said Sierra Leone has always been firmly adhering to One-China policy and consistently giving her support on issues related to China’s core interests and major concerns.

“The Chinese people will never forget that it was Sierra Leone and other friendly countries that helped China resumed her legitimate seat in the United Nations in 1971,”the Minister stated.

He concluded by reminding all of a Chinese saying that goes, “A mountain is formed by accumulation of earth and an ocean is formed by accumulation of water”. And that China and Africa have always been sincere friends who stand together through thick and thin, share weal and woe and advance side by side, noting that sharing the common dream and the common opportunities with Africa, China is willing to advance together with its African partners, including the people of Sudan, and make unremitting efforts to pursue common development and progress of China and Africa. 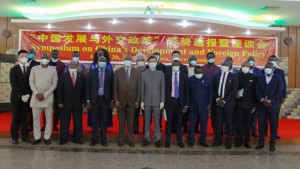