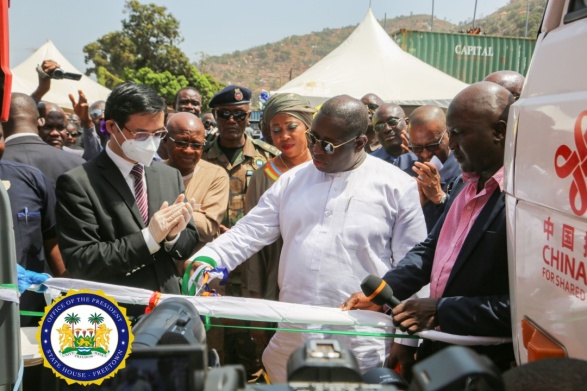 President Julius Maada Bio on the 26th April 2020 commissioned 15 China-Aid Water Bowers for the supply of water in the capital city and two fire engines for the Lungi International Airport.

Ing. Philip Karimu Lansana, Minister of Water Resources, expressed delight and thanked the President for his caring leadership and for making sure that water distribution to every household is possible. He also thanked the Government of the People’s Republic of China for their continued support to Sierra Leone.

Ing. Lansana further noted that the water bowsers would provide adequate and reliable water supply because the exponential increase of the population and rapid growth of Freetown had challenged the provision of adequate water supply to all households in the city.

“These bowsers will add to the existing ones that will ameliorate the water situation in areas where there is inadequate or no network in Freetown. We are, therefore, very grateful to the government of the People’s Republic of China for this timely assistance,” he ended.

Chinese Ambassador to Sierra Leone, His Excellency Hu Zhangliang, said the donation of the 15 water bowsers and two fire engines is to support and improve the water supply situation and to further enhance the safety of the Lungi International Airport. He added that the machines are the best of their kinds produced in China and equipped with the latest technology.

“This donation is another vivid demonstration of the continued growth of China-Sierra Leone friendship and one of the concrete steps taken by China to support Sierra Leone’s development. They can be gifts from the Chinese Government to the people of Sierra Leone for the Sixty-First Independence Anniversary Day,” he concluded.

In his statement, His Excellency President Dr Julius Maada Bio announced that his Government had indisputably done more to expand the existing water supply infrastructure and to make it more resilient in many years.

“Both the World Health Organization and UNICEF have stated that my Government has improved access to safe drinking water and sanitation over the last four years: 24% in the provinces; 6% in the Freetown area. They have also confirmed that my Government is making great progress on what they set out to do – increase access to potable water,” he said.

The President noted that low access could cause children to go fetch water and loses study time and that would expose them to social risks, adding that his Government’s focus is on human capital development.

“To address this problem, my Government has secured from the Chinese Ambassador to Sierra Leone, a total of 15 bowsers and 2 fire engines donated by the Government of the People’s Republic of China. The water bowsers will be used to enhance water service delivery to low-income communities in the Western Area,” he said.