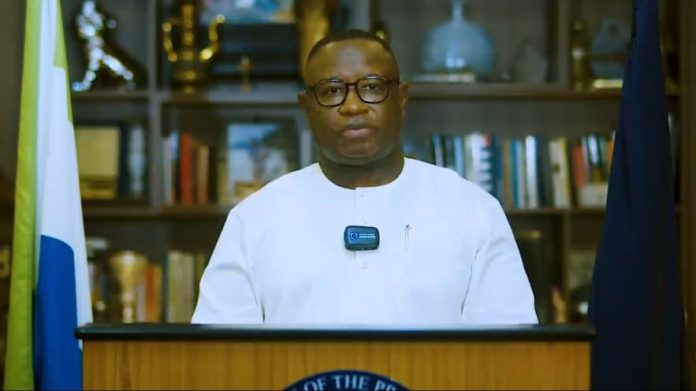 In his speech to the nation, marking Sierra Leone’s 61 Independence Anniversary, His Excellency President Julius Maada Bio informed the nation that the country, like all countries around the world, has continued to wrestle with the immense global economic crises and the lingering effects of the COVID-19 pandemic.

He said Global supply chains have been disrupted and everything around the world is now more expensive in every country maintaining how food, fuel, and other goods are now more expensive in United States, United Kingdom, France, China, Australia, India, Nigeria, Ghana, Guinea, and even in Sierra Leone than they were just a few months ago.

The President continued that his Government has taken immediate steps to soften the impact of these hard economic times through quick action economic recovery programmes and other subsidies as well as tax incentives that have kept essential goods in the market plus undertaking social safety net programmes to help out the hardest hit and most vulnerable of the citizens.

He said multilateral partners have praised his Government’s actions in successfully battling waves of COVID-19 saying in the last two years, the country’s response to the pandemic has been praised by the World Health Organization and the Centre for Disease Control.

He also intimated how they have also managed the economy responsibly and supported private sector growth, kept investments in human capital, infrastructure, energy, while protecting and promoting rights and good governance.

“In four years, we have increased agricultural productivity, introduced more mechanization in all sixteen districts, provided more input support for farmers, established more new cash crop fields, and expanded agricultural value-chains. This is more than any Government has ever done in four years,” he continued adding how they have built more roads and bridges, including rural roads and bridges, major international highways to Liberia, a highway to Moyamba, the Mabanga bridge, and the Magbele bridge. We are working on new highways in the Kono and Kailahun districts.

That they are building a $270M airport terminal, rehabilitating the national stadium for about $40M, building an ultra-modern foreign service academy, erecting several modern NASSIT regional offices, and all but completed the ACC and NATCOM headquarter buildings.

He said in just four years, they have expanded energy access and provided electricity to more towns and villages in Sierra Leone than any Government has ever done.

He said in sectors such as fisheries, mining, tourism, the downstream petroleum sector, the environment, and more, his Government’s performance over these four years has been highly commended by independent international organizations.

That his Government has either passed or is working on more laws and policies for the protection of girls, especially from sexual offences, and, the promotion of gender empowerment and equality laws, disability rights and empowerment, mental healthcare and more.

He said the Government passed the Millennium Challenge Corporation scorecard every year excelling in the areas of control of corruption and ruling justly, have abolished the death penalty, repealed seditious libel laws, actively advocated for investments in an independent media industry, and joined the International Religious Freedom or Belief Alliance.

That there is no journalist in prison for the practice of journalism and have continually reduced prison populations, invested in and registered remarkable improvements in access to justice, disaster management, public safety, and the correctional system.

He said we are a tough and optimistic people in spite of the distractions of a few people, who have made talking bad things about the country a political hobby the Government is making great progress on all fronts.

The President appealed for all to focus on staying together to continue building a more resilient and progressive nation.

He said we have now earned the respect of nations all over Africa and the world and that International cooperation and support are at an all-time high and will keep doing more.

He ended by saying that in this holy month of peace and benevolence, let Sierra Leoneans continue to love their fellow-countrymen and women and understand that the purpose as a nation is bigger than personal ambitions wishing Ramadan Kareem and Happy Independence Day to all.