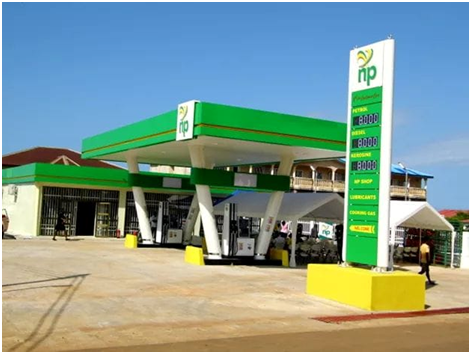 NP Sierra Leone Limited has been rated as a business entity that is first in terms of customer care. Dealing in various petroleum products, the company has been widely acclaimed for the cordial, smart and efficient manner in how it is treating its numerous customers in different parts of the country.

The company has become very endearing simply because their dedicated staffs are trained to respond to the needs of customers. Giving satisfaction to customers forms a cardinal objective of NP and from what was learnt it has been maximizing that very well.

To set the records straight on how the company came into existence with avowed view to demystify misconceptions, it was thought worthy to just give a gist of how it all started for this sterling petroleum business entity that now stands tall within the petroleum landscape of this country and even beyond

In 1996 the Government of Sierra Leone sold its 60% shares in British Petroleum (BP) to some of the company’s members of staff. 55 % was paid upfront from the end of service benefits of the workers from BP and the 5% offered to all the other workers. Thus a new company known as LEONEOIL whose name later changed to NP started operations.
It was the World Bank that proffered advice for the privatization of the company. The 55% sale of Government shares to NP therefore came as a result of the World Bank’s admonition.

Four (4) companies took part in the bid, but it was LEONOIL that won the international competitive bidding that was conducted by Arthur De Little (a United States based Management consultancy firm). LEONEOIL later on metamorphosed into NP, meeting all the set criteria. It was understood that the members of staff were very serious and capable enough to properly manage the company to such an extent that, unlike others, it survived most of the challenges that it encountered.

This medium also gathered that the 40% PMMC’s stake in the company, owned by the late Jamil Sahid Mohammed and Tony Yazbeck, was given as collateral for a loan from a Bank by one of the parties.

Jamil Sahid Mohammed, later sold to Cape Oil PMMC’s 40% shares to offset a fidelity loan, but LEONE OIL, now NP, was not satisfied with that move and took the matter to court on the grounds that it was in violation of the Memorandum of Association, which dictates that the other side has the first option to buy. The outcome of the matter was that the High Court gave judgment in favour of LEONE OIL now NP-SL.

As a matter of fact the company now has what is known as NP-Smart Card which is a Card with a memory chip used in a cashless way to buy fuel by just slotting the card in a space of a pumping machine, with instruction of the amount of fuel required and as long as there is credit (money) in the NP Smart Card the command or instruction is automatically adhered to and the fuel requested for is released. It is very convenient and a secure way to procure fuel.

The company also has for sale NP Gas, which is a cooking device that is powered by gas. They come in different sizes and are marketed at various Filling Stations as well as by authorized dealers. It has been attested that it is environmentally friendly and not hazardous to users’ health.

It is on record that the company operates a policy of giving preference to locals in all the countries it has a presence in with regards to employment. Employment opportunities are solely reserved for nationals and it is only for rare technical jobs that require expertise knowledge that jobs are given to foreigners but most times on short contract basis. Such a policy helps in poverty reduction.

The company falls within the bracket of those that pay a colossal amount of taxes to the National Revenue Authority (NRA) within the country thereby helping in giving the Government the financial muscle to roll out development projects.

It will really surprise some to know that NP does not only exist in Sierra Leone but also in neighbouring Guinea, Liberia, Ivory Coast and The Gambia and more importantly it is an indigenously owned company.

It must be an onus, on the part of patriotic Sierra Leoneans, to always support our indigenous company to continue to impact development not only at home but within the West African sub-region as well.