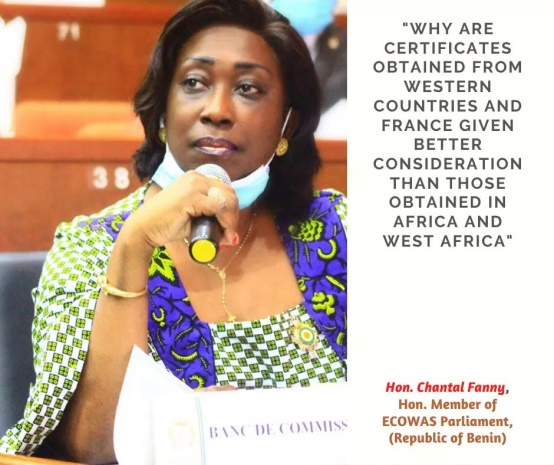 The Economic Community of West African States (ECOWAS) has urged member States to collaborate in academic research. On Wednesday 23rd July 2020 the issue was raised during the discussions at the Joint Committees meeting of the Committee on Education, Science and Culture and the Committee on Information, Communication and Technology (ICT) of the ECOWAS Parliament held virtually.

During the session, the ECOWAS Parliament committees were to consider and also present to the plenary the referral from the ECOWAS Commission on: (1) Adopting the Rules for the Support Programme for Research and Innovation; and (2) Adopting the ECOWAS operational Strategy for Spatial Sciences and technologies.

Meanwhile, as the session continued, one of the ECOWAS Parliamentarians who dilated on the significance of regional collaboration on academic researches, Honourable Chantel Fanny called on regional Governments to teach at the preliminary stages all three regional languages such as English, French and Portuguese as she said this can help greatly in regional integration.

Deputy Speaker 4 of the ECOWAS Parliament, Honourable Adja Satu Camara Pinto spoke about the importance of research in Agriculture. She called on the ECOWAS Commission to look into issues of research on insecticides and flooding which she said are direct link to scientific research.

ECOWAS Commissioner on Education, Science and Culture, Professor Leopoldo Amado, whilst responding to points raised by the Honourable Members said the Commission’s scientists are all working together irrespective of country of origin. He said it would be prudent to use traditional languages like Hausa, Madinka and Fullah which are non-Western languages to help in academic research.

Director of Education, Science and Culture at the ECOWAS Commission, Professor Abdoulaye Maga was pessimistic that teaching the three regional languages has not been met. He cited that it is very difficult for West African schools to get expert teachers in all three regional languages, apparently because of what he referred to as funding issues.

Meanwhile, on her side whilst addressing and presenting the report of the ECOWAS Commission on Education, Science and Culture to Parliamentarians virtually, Mrs. Rachel Ogbe, Principal Programme Officer (PPO) on Education of the ECOWAS Commission, stated that ECOWAS seeks to achieve a number of specific objectives, the first being to develop regional criteria for the harmonization of pre-university qualifications, in particular the period of study, content of curricula, qualification assessment and other prerequisites for the establishment of equivalence of Member States’ accreditation systems.

This, according to her presentation, will involve defining benchmarks/criteria to match university and professional qualifications in the region, draw up a list of courses in Member States’ universities as well as admission requirements, number of years of study, required credits and certificates.

Other specific objectives contained in her presentation will be to clarify the classification of academic qualifications (certificate, diploma, bachelor’s, master’s, doctorate, etc.) in Member States and develop a road-map for the implementation of the ECOWAS Convention on equivalence of certificates.