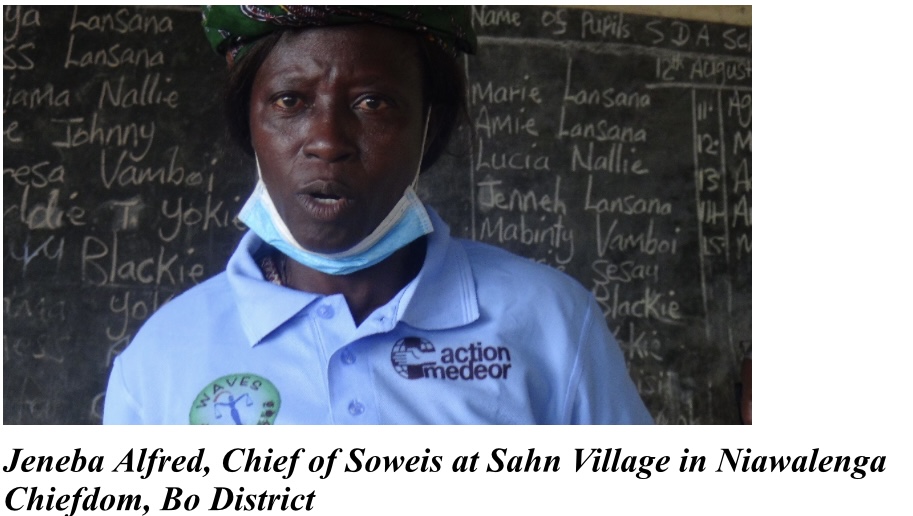 Jeneba Alfred, Chief of Soweis at Sahn Village in Niawalenga Chiefdom, Bo District has encouraged school going children in the Chiefdom not to go through Female Genital Mutilation (FGM) but to focus on their education in order to meaningfully contribute to the development of the nation.

She made that statement at the celebration of the International Day of the Girl Child by the Women Against Violence and Exploitation in Society (WAVES) Sierra Leone with support from Action Medeor.

The celebration, which attracted children from different schools including stakeholders in Niawalenga Chiefdom, took place at the Seventh Day Adventist Primary School at Nengbema Village on Friday, 16th October 2020.

The Chief of Soweis said, “I want the children to know that Education is better than FGM. Education takes you to oversee countries but cultural practices like FGM will not take you there. Our chiefdom is underdeveloped and it is through the education of our children that this chiefdom can be developed.’’

Momoh Lukullay, the Program Manager of WAVES, said that Action Medeor is a German based medical organization that has supported a project titled ‘Ending Female Genital Mutilation of Adolescent Girls in Bo District Through Capacity Building, Community Dialogue and Girl’s Empowerment”. He furthered that WAVES-SL was supported to celebrate this year’s International Day of the Girl Child with the International theme: “My voice, Our equal future”.

‘’WAVES-SL is promoting rights to access to health, thus the reason it was supported by Action Medeor to Campaign to end FGM which has disastrous health consequences,” Mr. Lukulay said.

The Project Officer of WAVES-SL, Laura Miatta Lahai said, “Girls face several challenges that militate  against their potentials to advance themselves and are hence subjected to so many rights abuses and violations including Sexual Penetration ,Early Marriage, Sexually Harassment, Discrimination and Exclusion from decision making.” She added, “as a human rights based organization WAVES has a mandate to ensuring a safe and enabling environment for women and girls, especially in the face of human rights abuses and violations they face.”

Madam Lahai went on to state that, “every year October 11, the International Day of the Girl Child is celebrated. Human rights based organizations including WAVES work with the girls to raise their voices and stand for their rights, pointing out that ‘’their engagement with the girls focuses on amplifying the voice of the girl child which she described as a tool for shaping their future.’’

She said their interventions in the community came to a halt because of the outbreak of COVID-19, but their intervention has been impressive with huge positive impacts communities by training mentors to work with children to become productive citizens of the chiefdom and that plans are underway to teach the children on advocacy.

The representative from the Head of Schools in Niawalenga, Moses M. Blackie said that the school authorities have committed themselves to giving their unflinching cooperation and support towards the implementation of the project, adding that the impact of WAVES intervention will help the chiefdom to have educated women as the chiefdom lacks educated women.

A representative from the religious leaders at Niawalenga Chiefdom, Pastor Samuel Yorkie said they will preach against FGM during their religious gatherings and encouraged the children to treat their academic work with the seriousness it deserves.

Earlier, the Town Chief of Nengbema Village, Henry Lansana commended WAVES-SL for extending the celebration of the International Day of the Girl Child in his community and pledged their commitment of giving support to WAVES for a successful implementation of the project.

The Head of WAVES-SL Community Based Action Team or COMBAT Women at the aforementioned community Madam Agness Yorkie, who delivered the keynote address, said that their Chiefdom has been behind for far too long but with the intervention of WAVES  tremendous change has been brought in their chiefdom especially in the area of Gender equality, reduction in Sexual and Gender Base Violence among others.

She said the COMBAT women is a group that stands for the promotion and protection of the rights of the women and girls, adding that they are working with the mentors trained by WAVES to ensure that they put an end to sexual harassment, teenage pregnancy stating how they will always tell the children to report any act of sexual abuse and violation of their rights in their communities.

Martha Robin, a pupil of Seventh Day Adventist Primary School, while moving the vote of thanks said that early marriage contributes to school drop out rates and FGM leads to death, assuring that they will not be involved in such traditional harmful practices and therefore thanked WAVES-SL for celebrating the International Day of the Girl child in order to raise their voices on issues that are not good for them.