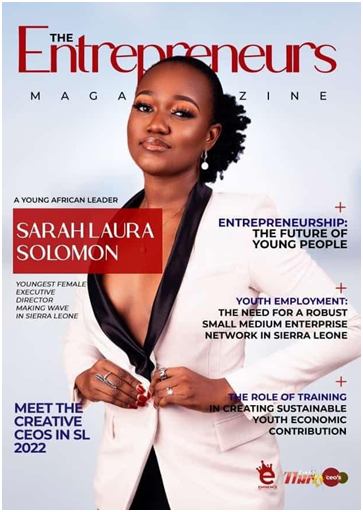 “SERVICE got me here. I love to serve, but not in a traditional 9 to 5 job. The 9 to 5 office culture never appealed to me.

All through school, I identified as a creative, so I never wanted to be locked in a box, but rather wake up to different things with different approaches and the exciting part of it for me is, taking risks to bring solutions.” She expressed.

Eminence was a social association made up of a group of friends from its inception.

In early 2019, it was reregistered into a corporate entity by the Chief Executive Officer, in agreement with some friends and his wife(then girlfriend) – Sarah Laura Solomon, who happens to be his business partner. As they grew into mature adults, they decided to use Eminence; which is built on the foundation of passion and love for country, to serve Sierra Leone and its people.

With efficient delivery and immense passion flowing through staff members and management, the company needed to expand due to the rapid increase of its operations. As a result, it was re-registered again into a holding company with six subsidiary companies, all managed by young visionaries.

Sarah had other dreams, but being into entertainment whether as a talent or creative, was one of them. So the mission and vision of Eminence, especially its values – are the facets that helped develop her interest in Eminence. The idea that they work as a team too, being that the workforce is made up of youths with an average age of 25, is just what Sarah had always dreamt of. “We aren’t given enough chances as young people, yet we are being judged as lazy. Our elders are not only seated in places we are meant to occupy, they refuse to carry us along too – like it’s a competition.” She further expressed.

According to Sarah, it exhilarates her to see young people in Sierra Leone creating their opportunities, grabbing spaces, and in fact, taking serious strides in breaking barriers and changing the narratives about young people in business and leadership. She loves adventure because it lets her dream and most definitely; she loves the kind that impacts lives, positively, while making a living. Eminence is just the start, as she dreams to invest and launch multiple ventures and businesses in the nearest future.

She concluded that it has been a long journey with Eminence, but still nowhere close to where they aim to be.