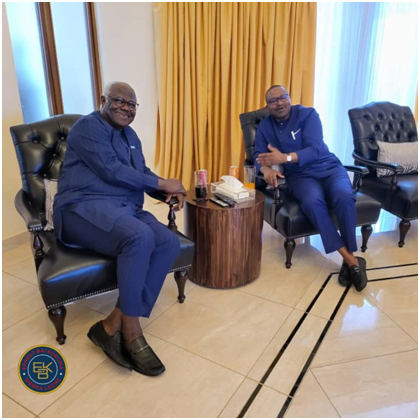 Erstwhile President of Sierra Leone, Ernest Bai Koroma, has on the 29th May 2022 endorsed the country’s bid for a seat in the Non-Permanent Category of the United Nations Security Council (UNSC).

His endorsement follows a courtesy call by the country’s Vice President, Honourable Dr Juldeh Jalloh, on the former President at his residence in Makeni.

The two discussed a wide range of issues bordering on national development and social cohesion. The Vice President briefed former President Koroma on the progress of the Transco Electricity project which will provide electricity to many parts of the country when completed, and which remains close to the heart of the erstwhile President. The project has already brought reliable electricity supply to Bo and Kenema, as well as several towns and villages along the project lines in the South and Eastern parts of the country. Vice President Juldeh informed that the next phase of the project which is its expansion into the northern region is well underway.

On the international front, the Vice President intimated former President Koroma about the Government of Sierra Leone’s intensified diplomatic campaign for international support for the country’s aspiration to return to the Non-Permanent Category of the Security Council. The last time Sierra Leone held such a seat was between 1970 and 1971. Given the rotational nature of this, and the sheer number (54)  of African countries within the United Nations, it is not surprising that it has taken this long for Sierra Leone to once again be eligible to serve in that category of the UNSC.

“I will endorse anything Sierra Leone aspires for at the United Nations (UN), the African Union (AU) and the Economic Community of West African States (ECOWAS), and will leverage international goodwill in pursuit of such an aspiration, as long as it brings pride and honour to our beloved, nation Sierra Leone,” said former President Koroma.

President Koroma has repeatedly said that he would always avail himself if called upon on matters of national interest.