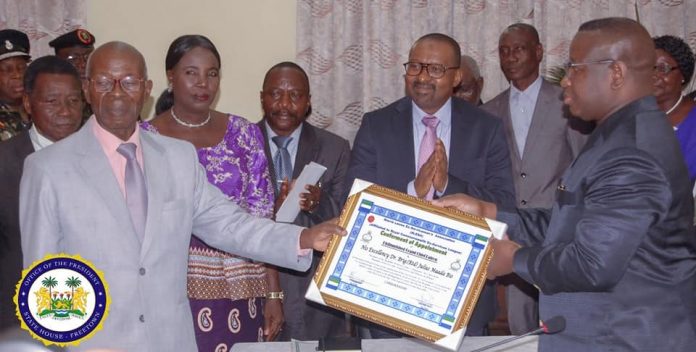 A one day workshop was organized by the Action Group for Peace and Development (AGPAD) on Friday 15th March 2019 at the Atlantic Hall National Stadium with the theme “Say No to Violence and Support the Commission of Inquiry”.
In his welcome statement, Issa Kolleh Dumbuya thanked colleges and others who are supporting the organization further maintaining that peace will be sustained through the diligent contributions of ex Services men. He noted that they fought selflessly leaving their comfort zones in order to ensure that the integrity of the State is ensured
He stated Government should encourage ex -service men because they have utilized their energies to defend the country.
Rtd. Bridger Sahr Komba Mondeh, one founding member of the organization who also served as Chairman of the event stated that the AGPAD is a national organization that encompasses certain security forces in the country including the RSLAF, RUF, Kamajors, Gbathies, that played vital roles during the 11 years civil conflict in Sierra Leone.
The workshop engagement was a clear manifestation that X- Combatants are denouncing all forms of violence extolling peace. The organization is 100% supporting the Government to continue with the Commissions of Inquiries is for the betterment of this country underscoring that it no witch hunt.
Mondeh promised to employ Ex- combatants at his private security farm.
Deputy Youth Affairs Minister in his statement said there will be no development if there is no peace furthering that the former child Ex-Combatants are now youths.He pointed out that the President himself is a retired Army Officer and the increase of the pension of Ex-servicemen clearly demonstrates that the government is committed to uplifting the status of ex-servicemen in the country.
He however pleaded to the Sierra Leone Police to be a little bit flexible with the Bike riders, as most of them are ex-servicemen.
Ambassador Joe Blell, Former Minister of Defence, encouraged the men not to politicize the organization, as that is common with most organizations, “ if any politician tells you to go out and fight for them, ask them to bring their children, because most of their children are abroad pursing their education, while they give you drugs”. He stated that there is nothing bad to set up Commissions of Inquiry.
Tamba Sam from the Ministry of Internal Affairs said that the Ministry felt humble to honor such an invitation; because the event falls under their purview, “but we are only there to design policy, we have the implementing institution.” He admonished them to use the skills accrued for the betterment of the nation.