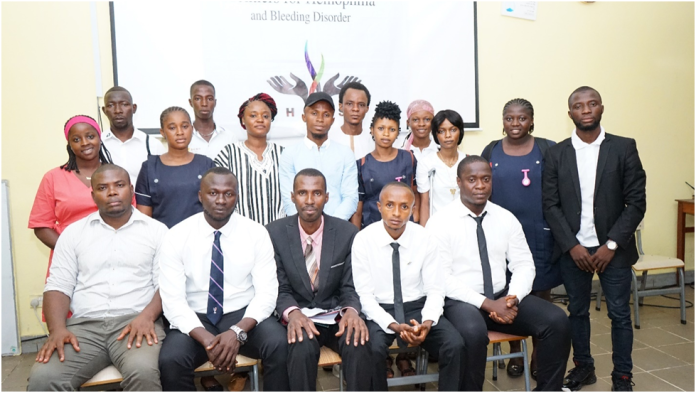 As part of their efforts towards empowering Sierra Leoneans on Hemophilia in the country, the Frontiers for Hemophilia and Bleeding Disorder (FHBD-SL), a registered non-profit, non-governmental, volunteer based patients’ organization working towards the provision of affordable medical facility to all those suffering from bleeding disorders in the country has on Tuesday 25th October, 2022 facilitated the travelling of 4 medical volunteers attached at the Connaught Hospital and the Ola During Children’s Hospital in Freetown to gain two weeks training on Hemophilia at the  Free State University in South Africa.

Speaking during the ceremony, the President of Frontiers for Hemophilia and Bleeding Disorder (FHBD-SL), Harry M. Koroma stated that Hemophilia is a rare disorder in which the blood doesn’t clot in the typical way because it doesn’t have enough blood-clotting proteins (clotting factors), stating that if someone is suffering from hemophilia that individual might bleed for a longer time after an injury than they would if their blood clotted properly.

He said that, over the years, many Sierra Leoneans have been silently suffering from Hemophilia of which he said that his organization has been working tremendously toward raising the awareness on Hemophilia Disease in the country.

The President maintained that the organization has been partnering with Government institutions, local organization, community networks and international organizations in a way to develop a coordinated effort in their quest to combat bleeding diseases in the country.

He added that they have undertaken series of activities including raising awareness about bleeding disorder, providing a coagulator machine, training and empowerment, facilitating affordable diagnosis for patients with bleeding disorder on diagnostic days and to provide free and ongoing medication to all Hemophilia victims.

Harry M. Koroma further revealed that as part of their efforts towards capacitating Sierra Leoneans to know about Hemophilia in the country, the organization is proud to announce that they have secured an opportunity for 4 medical volunteers attached at the Connaught Hospital to gain training on Hemophilia at the Free State University in South Africa.

The President pointed out that the organization has also been doing training and development of which the Frontiers for Hemophilia and Bleeding Disorder and its partners provided series of training opportunities for their volunteers both within and out of the country.

“We have training for laboratory technicians, nurses, doctors, social workers and physiotherapist. This will keep FHBDSL and the entire medical family up to speed about Hemophilia and other bleeding disorder. We believe this will help provide relevant knowledge, skills and experiences needed to perform relevant tasks with maximum efficiency,” he disclosed.

Commenting on behalf of the beneficiaries, Doctor Mavolo Toure, a Medical Officer at the Ola During Children’s Hospital commended the Frontiers for Hemophilia and Bleeding Disorder (FHBD-SL) for giving them the opportunity to gain two weeks training on Hemophilia at the Free State University in South Africa.

He described the move by the organization as a laudable venture towards capacitating them with the required knowledge on Hemophilia in the country.

He maintained that at this is the very first time they are benefiting on such training on Hemophilia adding that with the training, the availability of the machine and awareness raising will help to increase the knowledge of Sierra Leoneans on Hemophilia.

Doctor Mavolo Toure concluded by assuring all that as they represent Sierra Leone in the Hemophilia training in South Africa they will come back and give back to society by embarking on massive awareness raising and training of other medical personnel on Hemophilia across the country.