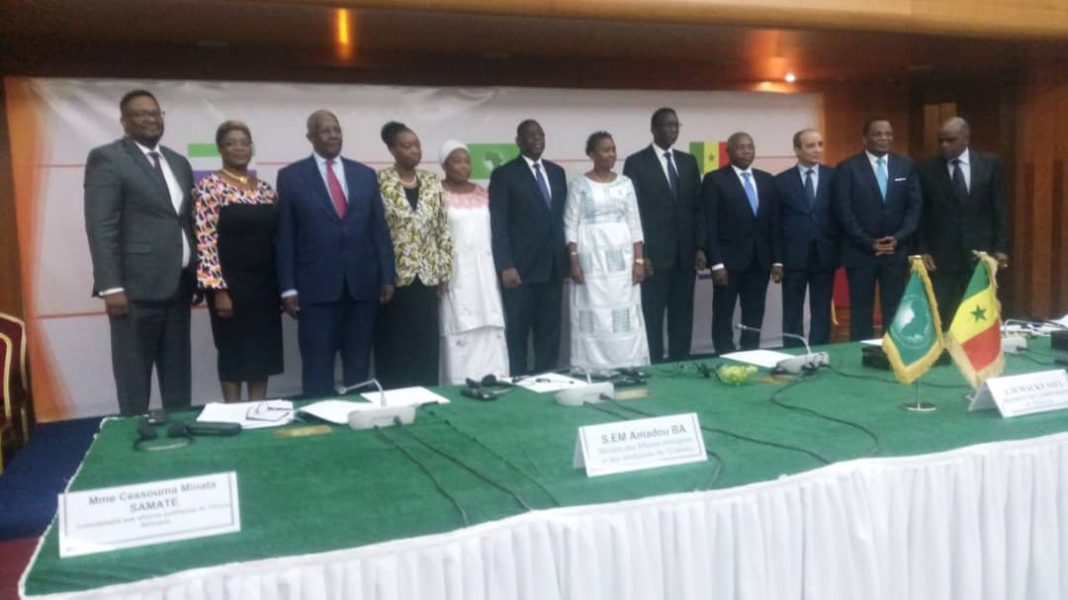 Sierra Leone’s Foreign Affairs Minister, Nabeela Farida Tunis, was the Chair of the 8th Session of the Ministerial-Level Meeting of the African Union Committee of Ten African Heads of State and Government C-10) on the reform of the United Nations Security Council at the King Fahd Place Conference Hall in Dakar, Senegal on Monday 13th January, 2020.

Delivering her statement, the Hon. Minister noted with satisfaction that their presence was a demonstration of the collective commitment of African Heads of State and Government in pursuing the mandate to canvass, promote and advance the Common African Position on the Reform of the United Nations Security Council.

“Allow me, Your Excellency President Macky Sall to convey to you sir, hearty commendations from His Excellency President Dr. Julius Maada Bio, for Your Excellency’s unflinching personal commitment and that of his other peers C-10 Heads of State and Government to canvassing, promoting and advancing the Common African Position, as well as for upholding the exactness of our position on the reform process,” she stated.

The Minister recalled that several consultative meetings have been held in different African cities including Freetown, Nairobi, Oyo, Livingstone, Windhoek and Malabo and that they are in the historic city of Dakar to continue with the consultations on how to build progress in advancing and canvassing the Common African Position as adopted in the Ezulwini Consensus and Sirte Declaration; and also to explore means to further solidify the cohesiveness and unity among African Union Member States on the reform process of the United Nations Security Council.

Madam Tunis maintained that, the Coordinator, His Excellency President Julius Maada Bio, has, on few occasions, stated that, the United Nations was designed for a different world, born as a result of the effect of the Second World War, when colonial reign was supreme.

She said the Dakar meeting provided them the opportunity to take stock of the current state of play of the reform process, and accordingly report to their Heads of State and Government on the way forward.

She expressed her profound thanks and appreciation to those member states that have recognized and supported the call for the immediate redress of the demand for an equitable representation in the Security Council.

The Sierra Leone Foreign Minister on behalf of her colleague Foreign Ministers, thanked the Ambassadors from Addis Ababa and New York and their experts for the great commitment they demonstrated at the Senior Officials meeting on Sunday 12th January, 2020.

In her statement, the African Union Commissioner on Political Affairs, Her Excellency Cessouma Minata Samate, thanked and applauded the Government of Senegal for hosting the 8th Ministerial Level Meeting of the Committee of Ten Heads of State and Government (C-10) on the Reform of the United Nations Security Council.

She stressed the need for unity among Africans and encouraged all to hold firm to the Common African Position within the frame work of the Ezulwini Consensus and the Sirte Declaration, which, according to her, will help to address the historic injustices meted out to the African Continent.

In his official opening statement, the President of Senegal, His Excellency Macky Sall, expressed his thanks and appreciation to the delegates for their commitment to the Common African Position and attendance at the meeting.

He thanked his Sierra Leonean counterpart, His Excellency President Dr. Julius Maada Bio for his unwavering time and efforts in coordinating the C-10.

The Dakar Ministerial Level Meeting, President Macky Sall said, was an opportunity for them to evaluate the ongoing New York negotiations on the Common African Position on the Reform of the United Nations Security Council.

He called on his African counterparts to be firm and steadfast on the Common African Position for 2 Permanent Seats with veto rights and 2 Non-permanent Seats at the UN Security Council.