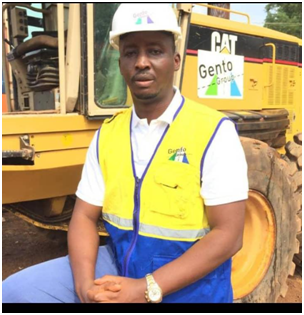 It has been established that the vast majority of the residents of the Freetown Municipality are highly hopeful that a positive transformation is about to transpire within the Freetown Metropolis after the election of Mohamed Gento Kamara as Mayor of the Freetown City Council.

Based on an in-depth investigation conducted, it came out glaringly that most Freetonians see in this young man’s zest, good initiatives and his intense love for humanity to completely change the face of the city to one that will not only be truly united, attractive, captivating but also cosmopolitan to the core.

According to a school of thought, an attractive city needs to be always clean of garbage which therefore means that cleaning must be undertaken regularly. Cleaning obviously requires both the financial and material resources for it to be effective and impactful. They maintained that the greater chunk of revenue that the Freetown City Council  expends goes towards waste management in terms of paying cleaners or waste collectors, the fueling and hiring of trucks to transport the waste.

Some have purported that owning a reputable road construction company, Mohamed Gento Kamara, indeed possess some of the requisite material resources needed to aid in the cleaning of the city. With front loaders, caterpillars and other equipment at his disposal or which he could hire at appreciable negotiated rates, Mohamed Gento Kamara, as Mayor of the City would really be at a vantage position to always keep the city clean.

As the Chief Executive Officer of a road construction company, Gento has built a cordial relationship with other utility entities such as Guma Valley Water Company, EDSA, SLRA etc. With those connections, cleaning exercises could be done cautiously and effectively without causing damages that may affect the delivery of other services.

However, it must be pointed out that since governance is a two-way Street the maximum cooperation of city residents will be required in the sense that they must desist from throwing garbage in the wrong places which forms a contributory factor to flooding taking place in the rainy season with destructive consequences. It could only be expected that with solid sensitization backed by legal sanctions the negative attitudes of some will definitely give way for sanity to prevail.

Youthfulness is in favour of Mohamed Gento Kamara. Being a young man will not only be the unique quality that will make Gento a good FCC Mayor but his good interpersonal relationship which he has skillfully developed over the years, especially with the grassroots is what Gento’s true asset is.

His provision of job opportunities, through his construction company, Gento Group of Companies, his compassion for the less privileged through his philanthropic gestures, his support to sports, good causes undertaken by young people are the things that propel people to him or make him very endearing to the vast majority of Sierra Leoneans.

This was very evident on the 15th October, 2022 when he engaged residents of the Kroo Bay Community. Speaker after speaker spoke loftily of the good things Gento has done for that community and elsewhere even before declaring his intention to vie for the Mayoral Seat.

It is this trust that the vast majority have reposed in him with the unshakable faith that he will translate his promise of constructing a retaining wall, which residents of the Kroo Bay Community have been yearning for a long time, into a reality.

The demonstration of genuine love for the man of the moment, Gento, by the majority has negated the notion that some are hypocritically pledging their support, doing so for financial gains likening the situation to that of when former Vice President, Solomon Berewa was vying for the Presidency.

Some say unlike Solo B, who was by then an old man, Gento is young, hale and hearty with an exploring mind and above all he is loved by many.

Gento’s stance of upholding nationalism, patriotism as opposed to infusing tribalism with politics, leaving destructive consequences in its wake, resonates with the majority of residents of the Municipality.

Dating back to 1967, tribal politics took a foothold in the country with the two dominant political parties, the Sierra Leone People’s Party (SLPP) and the All People’s Congress (APC) Party drawing their support from the two main ethnic groups, Mende and Temne respectively.

Since that time , elections have been fought along tribal lines with dire consequences.  However, the greatest disadvantages are development is derailed, disunity is sowed and hate is allowed to flourish.

If, as a city, Freetown is to grow then that trajectory must change and the man that has emerged to create that revolution is Mohamed Gento Kamara.

As an individual, himself, Gento, epitomizes a united city (Freetown). Gento hails from a family in which his father is Temne, mother Limba and wife a Mende, all three major tribes in the country.

He is sending the strong message that though belonging to different tribes, however, we are all Sierra Leoneans and that no one tribe, be it Creole, Temne, Mende or Limba do not have a monopoly over governance issues and destined to govern others.

He is rather saying that in governance, equal opportunities are paramount if only excellence and development are to transpire.

It could only be concluded that the hope of many Freetonians of Freetown being delivered by Gento is built on the solid foundation that he has all what it takes to transform Freetown into becoming one of the most attractive cosmopolitan cities in the West African Sub-region after he would have been elected as Mayor of the Freetown City Council.