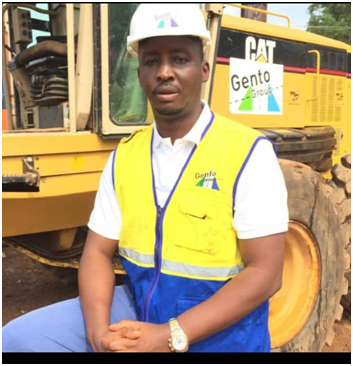 The result oriented, development centred, pragmatic and charismatic Freetown City Council Mayor in the pipeline or in waiting for the appropriate time, Mohamed Gento Kamara, whose occupation of that covetous position is a foregone conclusion, evident in the mammoth support he has already garnered or have rallied around him within the Municipality, especially in the East End of Freetown, from day one when he made his intention to vie for the position known, has intimated this medium that he is determined and resolute to break the back of tribalism in the country and enhance the transformation of the Freetown Municipality to become hospitable, accommodating with the vital amenities that behooves any standard city.

Mohamed Gento Kamara underscored that Freetown is the residence of indigenes from various tribes across the country further maintaining that one of the factors that has hindered the development of the nation is the fusion of politics and tribalism.

“It is always worrisome to see politics being practiced along tribal lines as such most times leads to violence, bloodshed and sometimes deaths,” he lamented emphasizing that there will be stunted development whenever we witness members of the Temne tribe pitching tent against members of the Mende tribe on political lines with the main objective of scoring cheap political points. He pointed out that even though it is well known that the All People’s Congress (APC) Party draws its main support from the Temne ethnic group and the Sierra Leone People’s Party (SLPP) from the Mende ethnic group that trajectory must be stopped and there is a need to turn a new page in the politics of this country.

According to him it was against that backdrop that he recently decided to engage all the tribal heads in Freetown to reason out with them to put tribalism aside and unite to rally behind the Head of the Municipality to ensure that development objectives are realized.

Addressing Traditional leaders from the Western Area, the astute personality succinctly informed them that his aspiration to contest as Mayor for the Municipality of Freetown is grounded on “breaking the hydra of tribalism” which has been heightened by bad politics.

“For far too long, there had been so much tension among the tribes in Sierra Leone and we need to put an end to hypocrisy and work together to develop the Freetown Municipality in particular and  Sierra Leone in general because this is the only country we have,” he reasoned out with the revered and highly respected leaders.

Indeed, this has been the first time in the history of Sierra Leone for one personality to bring together all the Tribal Leaders within the Freetown Municipality and prevail on them to appeal to their subjects to desist from tribalism and stay united for development.

The unassuming road construction expert intimated that when he emerges as the Mayor of the Municipality he will ensure that the issue of residents within the Municipality finding it difficult to access pure and clean water supply becomes a thing of the past assuring that with his construction background he is of the strong conviction that he will be able to accomplish that.

He stressed that he is knowledgeable in changing utility infrastructure, an ability which he said he has demonstrated for over 10 years now.

In his usual candid manner Mohamed Gento Kamara, also revealed that his conviction to aspire for the Freetown Mayoral seat partly emanated from the 10th August incident.

“Some people will not understand the impact of the August 10 incident… That incident has taken this country backward for another five years because big investment companies or banks would be afraid to invest in Sierra Leone because of instability,” he bemoaned.

The philanthropist, who, in the past and even present, has positively impacted lives directly and indirectly further explained that bad politicians are responsible for the political tension in the country adding that the people who are most affected by such a tension are business owners because they are the cogs of the economic machinery of the State.

“For some of us, for far too long our voices were not here because we are businessmen, but I am stepping in now to fight against bad politicians and politics, this is why I don’t preach party politics but appeal to all Sierra Leoneans who believe in me to follow me,” he reaffirmed.

He stated that tribal heads are an epitome of unity and a microcosm of how we should be as a nation noting that his aspiration is not to challenge the creoles but rather an opportunity for all to understand that we are all Sierra Leoneans maintaining that it should take all of us to develop Freetown come 2023.

Mohamed Gento Kamara informed the audience of how he strongly believes in President Bio’s commitment to develop Sierra Leone, which is why he is aspiring for the mayoral seat to help build a progressive and unified nation.