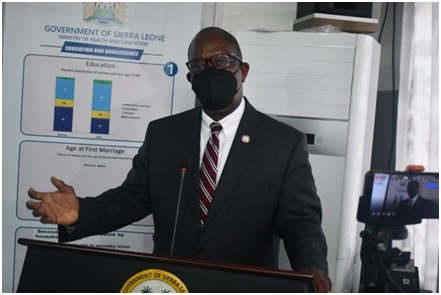 Categorically stated was that the Government has increased the salaries of all healthcare workers to make up for the loss of earnings resulting from the removal of COVID 19 allowances amounting to NLe.20.85 million (Old Le.20.85 billion) adding that the new salary structure will take effect on 1 September 2022.

Also mentioned was that an Extra-budgetary allocation of NLe.9.3 million (Old Le.9.3 billion) to cover weekly allocation of 45 Litres of fuel to eligible Health Workers (Grade 9 and above) to cover the period July to December 2022 maintaining how those benefits would be reutilized beyond December 2022.

It was stated that to such an end, the Government has now directly paid fuel to the oil companies and disbursement of fuel to eligible Health Workers would be by actual delivery of fuel with retained evidence of post utilization/ audit verification, preferably by the Electronic Card System.

Highlighted was that all Health Workers with assigned Government and or donor-funded vehicles with the provision of fuel from any official source should not double dip.

The Health Ministry concluded by assuring the public of its commitment to saving lives, alleviating suffering and promoting the health of the people of Sierra Leone.