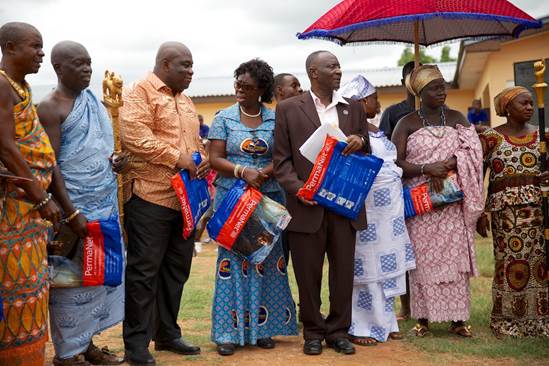 It was a Friday morning and everyone had gathered at the open view of the newly commissioned Aberdeen Community Health Center in the West of Freetown. It was the launch of the Long Lasting and Insecticide Traded Mosquito Net Distribution Campaign for Western Area Urban District. The scene was set; everyone was on face mask and a hand washing facility in full view of guests to do the needful.

The Deputy Minister of Health and Sanitation was in attendance and the Deputy Mayor of Freetown and representatives from the UN family, NGO partners and Sea Coach who had financed the construction of the much need Aberdeen Community Health Center were all seated, making the ceremony so colorful and high profiled.

Then, cameras started rolling and flash lights from smart phones also took part to record every moment of the occasion. At some point, this writer was battling with some of the camera guys for good shot and I was beaten out as they were recording scenes for journalistic purposes and you know time is always not in favor journalists. I was only capturing the moment for office use and programmatic reporting. So, I rolled my camera to the audience, which comprised of pregnant women, lactating mothers, caregivers, community members and other onlookers who had come to witness the occasion.

I think the invitation of pregnant women and caregivers of children under-fives was deliberate by the organizers as it was a campaign geared towards the registration of households and distribution of anti-mosquito tents which is one of the most cost effect preventive measures in the fight against malaria. Frustrating though, pregnant women and children under-fives are most at risk of this preventable disease – leading to morbidity and deaths in some instances if early actions are not taken.

As I continued rolling the camera to get a handheld ariel view of the guests, I pumped into Lamin Massaquoi who is in his early 30s and Yeama Massaquoi in her late 20s, mother and father of two set of twins, Lamin, the husband had accompanied Yeama, the wife at the launch to witness the occasion and they eventually ended been symbolic receivers of a treated mosquito net in addition to what they would have during the campaign registration and distribution period.

Lamin is a typical example of the male/partner support initiative promoted by the Ministry of Health and Sanitation and its Partners to scale up routine health services across the country.

For so long, many health interventions have been developed and implemented in the country targeting mostly pregnant women, caregivers and children under-fives without targeting the household heads who take the decisions , they give transport fare to the wife to take the child for his or her routine health services and the pregnant wife for her ANCs.

Before now,  when messages and communication materials were developed, the communication experts do not develop them with key messages in mind  for male participation and they were not even factored in most communication plans as  specific target audience who can support the uptake of routine health services. This seems to be a major backlash in communication failing to influence positive behavior on the side of the male of which the male folks were conditioned to think as if they do not have a pivotal part to play when it comes to the health of their young children and that of their pregnant wives.

Kudus though, this will now be a thing of the past as the recently developed Routine Immunization  Communication Strategy captured the lack of male/partner support as a key barrier in scaling up routine immunization servicers in the country and this strategy will form part of the overarching National Communication Strategy on Reproductive Health in the Sierra Leone’s health system, which will address issues on health seeking behavior to scale up uptake of routine immunization services/health interventions like immunization for children under-fives, anti-malaria services for pregnant women and infants, institutional delivery and Anti Natal Care (ANC) for pregnant women, exclusive breastfeeding of children six months from birth to name but a few.

Recently though, the Ministry of Health and Sanitation through its Health Education/Promotion Division in collaboration with its partners has been promoting male/partner support because they believe there has been a gap in that area and they now plan to reach out to male partners through specific channels/methods of communication to improve the uptake and scaling up routine health services across the country and across the board.

As a result, they now celebrate and acknowledge people like Lamin who decided to accompany his wife and twin children from their New England Ville residence to the Aberdeen Community Health Center to witness the launch of the LLINs mass distribution campaign, where they symbolically received a FREE treated mosquito net to prevent the mother and new burn twins against mosquito bite; thereby preventing malaria.

When asked what motivated him for his unique enviable gesture, he confessed that it was not the first and won’t be his last as he finds pleasure supporting and accompanying his wife and twin children to the health facility for routine health services. He happily added that in fact, he was accompanying his wife to their community health facility for her routine Anti Natal Care services during her pregnancy.

I would like to end this piece by urging men, husbands or partners to take pleasure and show interest the health of our children and wives just as Lamin has exemplified in this piece as he has explained that he has always supported his wife or female partner during and after pregnancy on to the period of exclusive breastfeeding which are very difficult times for them to go through and urged that they badly need our support and motivation during these times.

The support we seek goes beyond paying transport fare, a little effort by intermittently accompanying your wife/partner or even your child/children to seek routine health services will not only do a lot of good to the health of the wife/partner and that of the children, but also helps  psychologically.

We (men, husbands, and partners) should also be seen taking active part in the health of our children just like our hero, Lamin and especially for our children under-fives, we should support our wives/partners and monitor the under-fives cards of our children to abreast ourselves with their routine health status. This I believe will be one of the key benchmarks for the scaling-up of routine health services in Sierra Leone, even after the end of the current COVID-19 Pandemic.