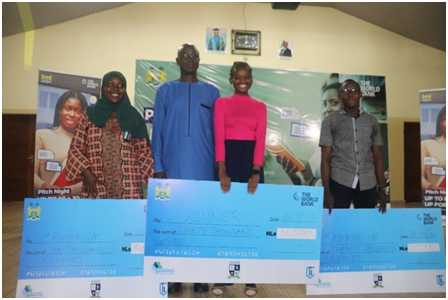 The Minister of Technical and Higher Education (MTHE), Dr. Alpha Wurie has enlightened that they have visited other public universities in the country and underscored the need to re-categorize staff for their conditions of service. He said that during the General Assembly of the Academic and Administrative Staff of the Milton Margai Technical University (MMTU) which was held on Saturday 29th October 2022 at the Great Hall of the Goderich campus in Freetown.

He articulated that there are only 16.6% PhD and 80% Masters holders in public universities in the country with the latter to undertake research, that 50% of the staff at MMTU would be upgraded yearly, that degree and post-graduate courses in the universities are not uniform noting that Sierra Leone is doing well in the education sector although there is need to fast-track it and reiterated the need to re-engine higher education stressing that Government would engage the Tertiary Education Commission to develop technical centers to community colleges and reaffirmed the need to rapidly expand higher education in the country.

According to Dr. Wurie, MMTU should also screen for specific faculties, introduce E-learning to meet modern trend, expand distance learning, highlighted the need for structural and management review and that more academic than junior staff should be recruited.

The Vice Chancellor and Principal of MMTU, Dr. Philip John Kanu assured all that the Minister has good message for MMTU, that they would always remember his legacy in the college, especially transformation of the institution from a teacher training college to a polytechnic and now Technical University but noted that the institution is now transiting to its new status and apologized for all what has happened in the institution.

The Chancellor of MMTU, Dr. Victor Kabia disclosed that it is necessary to give correct information to staff and students for them to be guided accordingly, that MMTU was established by an Act of Parliament, that the University Court, that is very strong with effective monitoring mechanisms, is the highest decision-making body that takes decisions that would advance the institution and assured that they don’t take things for granted.

Other issues raised by Dr. Victor Kabia are conditions of service for staff, that the transition from polytechnic to university is not 100% complete, that the University Court would thoroughly investigate all matters, that some staff are engaged in full time jobs elsewhere, others on leave of absence, that the Tertiary Education Commission would categorize staff for which it has undertaken a needs assessment, that there is capacity gap in terms of staff and therefore needs upgrading.

He continued that a good number of staff do not have Masters in Philosophy to be appointed to the position of Lecturer 1 and observed that most lecturers have not taken the challenge to improve themselves.

Earlier, the Director of Higher Education in the Ministry, Emmanuel Momoh revealed that the Ministry is not an arm chair institution for which it has organized similar events in other public universities in the country to have frank discussions with staff and students to know their successes and challenges and affirmed that MMTU is guided by the Universities Act 2001.

The Secretary General of the Students’ Union Government rendered the vote of thanks.

In another development, at the maiden Pitch Nigh event, a Student from the Milton Margai Technical University on Wednesday 26th October 2022 won the 1st position from the first-ever Pitch Night event held by the university at the Great Hall, Goderich Campus.

Lahinatu Mansaray, who won the grand prize of 30,000 New Leones with her business name “Business for All”, pitched an idea to solve the problem of a safe and secured online trading platform.

According to her, the process of production has become cumbersome because people want to make profit at every step taken. These include third parties who tend to realize more profit than the actual retailers.

The business, she said, is focused on building a legal market connection between the retailers and the wholesalers, devoid of swindling. 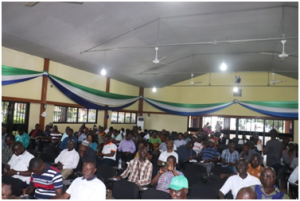