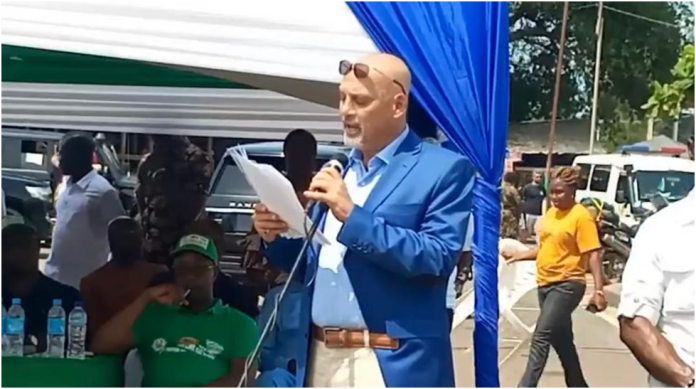 The Ministry of Tourism and Cultural Affairs received a cross-section of participants that took part in the Budapest-Bamako Freetown finish line rally at the Sierra Leone-Guinea border in Kambia on the 6th November 2022.

The participants were received by the Deputy Minister of Tourism and Cultural Affairs, William I.K Robinson on behalf of the Government and People of Sierra Leone.

566 participants from over 40 countries with 242 vehicles and motorbikes entered Sierra Leone through Gbalamuya and Madina Oula respectively to participate in the 2022 Budapest-Bamako Freetown finish line rally.

The participants left Hungary for Sierra Leone on the 21th October, 2022. They journeyed through Austria, Slovenia, Italy, France, Spain, Morocco, West Sahara, Mauritania, Senegal, Mali, Guinea into Sierra Leone. They covered a total of 11,000 kilometres to get into Sierra Leone.

The participants spent the night on the 7th November, 2022 at Magbando Village in Masiaka where they interacted with the community people.

They headed for Bureh beach on the 7th November, 2022 for a beach fiesta and then attended the finish line event at Gigibonta Car Park at Lumley beach on the 8th November 2022.

During a well attended ceremony chaired by the Minister of Information and Communications, Mohamed Rahman Swaray, at the Gigibonta car park on Lumley beach on the 8th November 2022  graced by His Excellency, President Julius Maada Bio, the Vice President, Dr Mohamed Juldeh Jalloh, the Minister of Tourism and Cultural Affairs, Dr Memunatu Pratt, a host of Government Ministers, officials as well as members of the private sector, the participants were warmly welcomed into the country.

In their statements, President Bio, the Minister of Tourism, Dr Memunatu Pratt and other public officials welcomed the participants and wished them a fruitful stay in the country. They all made references to the beauty of the country, its attractive landscape, the friendliness of Sierra Leoneans and opportunities that abound to be explored.

In his statement, the Honorary Consul of Hungary to Sierra Leone, Jihad N Eter, stated that it is with great delight and immense pleasure to stand on existing protocols to address this profoundly honored event at this climactic stage of the Budapest Bamako Rally in Freetown.

He said he would like to use the golden opportunity to thank His Excellency the President, and the Vice President of the Republic of Sierra Leone, for graciously consenting amidst their very busy schedule to attend the event.

According to him, such has clearly demonstrated the love, willingness and commitment of both His Excellency the President and the Vice President to rebrand the image of the beloved country Sierra Leone at every given opportunity, all in the spirit of patriotism and nationalism.

He registered his great respect and admiration for the hardworking Minister of Tourism and Cultural Affairs, Dr. Memunatu Pratt, whose contribution in the tourism sector has been excellent since she assumed that office.

The Consul pointed out that her vision for Sierra Leone to be the hub of tourism and one of the best touristic destinations in the world is extremely encouraging.

“With all the negative global challenges like COVID-19 Pandemic, the war in Ukraine and the rising economic hardship which have hampered the smooth visits of so many tourists all over the world, you still manage to convince many to come and visit our beautiful touristic sites in Sierra Leone,” he commended the tourists adding that tourists are always impressed with the beauty of the country and its touristic sites, citing the comfortable weather condition and unique natural landscapes.

He said since 2018 when he assumed the office of the Honorary Consul of Hungary to Sierra Leone, his office has been working very hard to further strengthen the already existing friendly relations between the Republic of Sierra Leone and Hungary.

He assured the President, the Vice President and the people of Sierra Leone that his office would ensure that it maintains the bilateral relations between the two countries.

Jihad N Eter stated that he is delighted to emphasize on the fifty (50) scholarships the Government of Hungary is giving out every year to Sierra Leonean Students to study in Hungary in various fields of study, through the Ministry of Technical and Higher Education,as a way of supporting His Excellency the President’s flagship program of Free and Quality Education.

He disclosed that forty-four (44) Sierra Leonean students were successful in this year’s application to study in Hungary.

“I am delighted to let you all know that Sierra Leonean students will continue to benefit from scholarships to study in Hungary as a way of enhancing His Excellency the President’s human capital development stride,” he said with pride adding that Knowledge is Power.

He also revealed that his office recently participated in the just concluded event of West Africa Agribusiness, Development of Trade and Economic Relation among West African Countries, which was organized by the Hungarian Chamber of Agriculture, the Embassy of Hungary in Accra and the Ghanaian-Hungarian Business Council.

He intimated that the event gave the opportunity to West African countries especially Sierra Leone to share their experiences, views on the state of play in agribusiness and on future cooperation opportunities.

According to him, in that event, he informed strategic stakeholders, agriculturists and diplomats how blessed Sierra Leone is with vast land and fertile soil suitable for agriculture.

He continued that Sierra Leone is blessed with rivers for irrigation purposes to help boost farms productivity especially with the growing effects of climate change.

“My office encouraged Non-Governmental Organizations (NGOs) with globalized networks, with extending international policies and international working partners to come onboard to partner with strategic stakeholders in the agribusiness industry to ensure agribusiness enterprises thrive in Sierra Leone,” he pointed out.

He said the numerous achievements of His Excellency the President, Dr. Julius Maada Bio marching with his motto “tok and do” and having provided the people of Kono with electricity, roads and the recent Kono University of Technology, the people are very much delighted for the water project in their diamond-rich district of Kono which the President reliably promised them that upon his second term in office he will ensure that they have quality, safe and pure drinking water.

“I wish to let them know that through His Excellency’s commitment and his hard working Hon Minister of Water Resources, Philip K. Lansana in collaboration with their Hungarian counterpart through the Hungarian-Exim Bank have put everything in place for the commencement of the said project,” he said.

He disclosed that it is also important to note that the Minister of Foreign Affairs and Trade of Hungary, His Excellency, Peter Szijjarto is making preparation to visit Sierra Leone.

To all participants in this year’s Budapest Bamako Rally, the Consul said he would like to extend a special welcome to them all and it is so wonderful to see them all here on the special event.

“Thanks for your hard work and dedication to make this rally a success,” he stated expressing hope that they would enjoy the serenity of the beautiful beaches, Islands, parks and other places.

He said they are hopeful that this rally inspires ideas, discussions, willingness and commitment to strengthen the bilateral relations between the two countries.

“Let me say to you all that you are heartily welcome to visit Sierra Leone with your families, friends, and loved ones so that you can tell the rest of the world about the beauty of Sierra Leone and the excellent hospitality you experienced,” he enjoined extending special thanks to the Sierra Leone Police for their relentless efforts and selfless service to provide security.