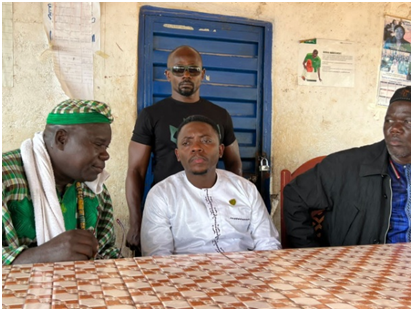 Chief Kadiru Kaikai received a rousing welcome in Kabala District when he visited that part of the country recently as he was assured by main stakeholders that they will ensure that President Julius Maada Bio is reelected as President of the country in order to complete some of the development projects that he has started. Stating that they have heard of the numerous strides that he has been taking to pledge his unflinching support for the first gentleman of the country, they have been eagerly looking forward to meet with him.

In his normal calm and calculated message for the inevitable re-election of President Julius Maada Bio come 2023, Chief Kadiru Kaikai, convincingly told the indigenes of Kabala District, once dubbed as the stronghold of the  main opposition All People’s  Congress Party , some of the good reasons why Sierra Leoneans should re-elect President Bio for a second term.

He assured the People of Kabala that President Bio is the only President with a golden heart that has the people and country at heart only succeeding to entice and seduce them into believing that he is passionate about their welfare and ready to go at great lengths to ensure that development is taken to every part of the country.

“My fellow Sierra Leoneans, the only person we need to look up to for more sustainable development is President Bio. President Bio is the only President who does not take into consideration political, regional and tribal sentiments or bias in addressing certain national issues. We should come together and support the President to succeed because when he does it is all of us that will succeed,” he said followed by a thunderous round of applauses.

Chief Kadiru Kaikai anchored that President Bio’s Presidency is not only meant for South-Easterner or North-Westerners, but for all Sierra Leoneans.

He made a clarion call for the people to join the united bandwagon of the SLPP mantra of One Country, One People.

Stakeholders in Kabala expressed gratitude to Chief Kadiru Kaikai for taking time off his busy schedule to pay them a visit.

They acknowledged that after God, next are their leaders which is the more reason why they as residents of Kabala District have decided to support President Bio and his Government.

They equally promised Chief Kadiru Kaikai that they would not engage in any violence that will disrupt the peace and tranquility of the country. The entire event was climaxed with a melodious traditional musical dance, performance and offering of prayers for President Julius Maada Bio and the SLPP Party. 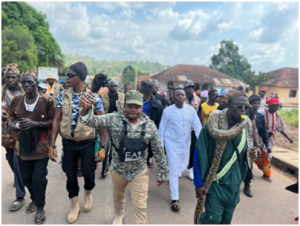