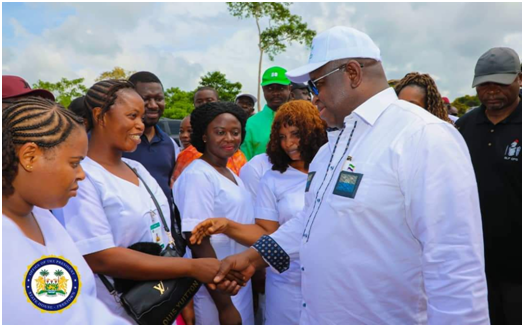 President Julius Maada Bio has continued his working visit to towns and villages South of the country, engaging his people on his achievements since 2018 and warning young people against drug abuse.

In Tikonko, where he presented the hospital with some medical equipment, the President referred to concerns about substance abuse in the country and particularly used the occasion to admonish the youths to desist from taking harmful drugs that could destroy their future. He added that his Free Quality Education initiative and investments in Technical and Vocational Education Training were meant to engage the minds of young people with skills that would be beneficial to them and their communities.

President Bio also said he was in that part of the country to reiterate his people-centred approach to leadership and governance, noting that he was also seeking firsthand information about developments and challenges. He encouraged them to take advantage of the opportunities his massive investment in education was creating, including sending their children to school for sustainable development.

On his way to Wonde Gboyama, President Bio stopped over at the Tivamia Agricultural Center where the Chief Executive Officer, Madam Lilian Rogers, talked about their investment in fish farming, rice cultivation, local soap making and honey processing, all of which directly serve the needs of the immediate communities and provide jobs for young people.

He thanked her for contributing to the growth of the agriculture sector and encouraged them to continue expanding so that the importation of certain foodstuffs and consumer products would be minimized.

The people of Teli Bongor and Wonde Gboyama expressed great delight at the President’s visit and thanked him for the many development efforts in the country, adding that they would continue to pledge their support to him and his Government as the country prepares for the 2023 elections.

Earlier in Tikonko, Paramount Chief Joe Kangbai Macavoray said he was happy to receive the President and his entourage, noting that that was the first time they were hosting a sitting President in that part of the country.

On behalf of the stakeholders of Tikonko, Samba Moriba described the visit as historic and noted that they as indigenes were pleased with the leadership of His Excellency the President.

The Youth Leader, Christopher Foday Sam King, also praised the President’s human capital development initiative that young people were benefiting from and particularly thanked him for the completion of the road from Bo to Tikonko and the electricity supply that was recently installed.