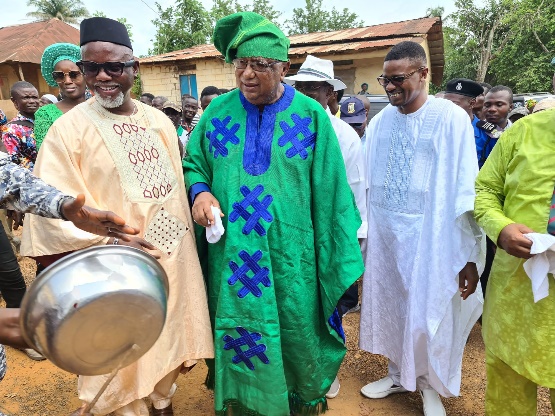 Former SLPP District Council Chairman, Kailahun, National Chairman and Leader of the party and onetime presidential hopeful, John Oponjo Benjamin was asked or prevailed on , over the weekend, to embrace members of the ruling Sierra Leone People’s Party (SLPP) onboard regardless of all what may have transpired.

That appeal was made by the party’s District Chairman, Gbessay Jusu Jaka Ngobeh (Chucky), during a special programme celebrating recent sons of the soil who are Presidential appointees across various roles in Government by President Julius Maada Bio.

Speaking at the jam-packed festive-laced Segbwema playing field with thousands in attendance, Chucky recognized that many hurts had happened internally, but now is the time to heal. In the party’s interest, J.O.B. should let bygones be bygones and work to solidify the party’s unity and stability ahead of the crucial 2023 elections, the Chairman emphasized.

Openly and amid thunderous applause, Chucky asked for forgiveness from J.O.B. if he had hurt him during the ‘family feud’ and stressed that for the chances of the party to increase without a run-off, Benjamin had a critical role to play in the district and nationally.

In his response, J.O.B. first thanked the chiefdom for the beautiful reception given to them during his first official return home together with the other appointees. He said that they are all coming together for the party stressing, “HE has agreed that all of us must come together to work in the interest of the party.”

The Presidential Adviser promised to play his part in holding the party together to retain peace and stability. “We are all working together. We will engage with other stakeholders, and let’s leave the past to the past,” he said.

On a cautionary note, the Kailahun strongman from Segbwema said their appointments should not be seen as a free ride. He asked all of them should prove by their work that it was not a mistake made by President Bio to bring them on board the governance process of the New Direction administration.

Chairman of the occasion, Resident Minister East, appealed for all appointees to be supported to the best of everyone’s abilities in unity.

The Paramount Chief said he was glad about the appointments and that it was not a mistake by the President.

All other speakers, including the appointees, Deputy Minister Sarjoh Aziz-Kamara and Edward Kamara, spoke on the need for party unity and national cohesion.

Aziz-Kamara said he was humbled by the show of love given to them by the people of Njaluahun Chiefdom and the entire district. He had no regret serving his country under the leadership of President Bio. “I believe and trust in the vision of H.E.,” he said.

A display of traditional dancers and masked devils and the return to the podium to make speeches from partisans who had otherwise taken a back seat from mainstream SLPP partisan politics but seem to have been reenergized marked the occasion.

One such speaker was former party Secretary-General, Lawyer Sulaiman Banja Tejan Sie, who said that the entire Western Area he hails from is poised to throw support as a united front to the SLPP as they seek to request a fresh mandate in 2023.

APC Takes the Lead in Parliament