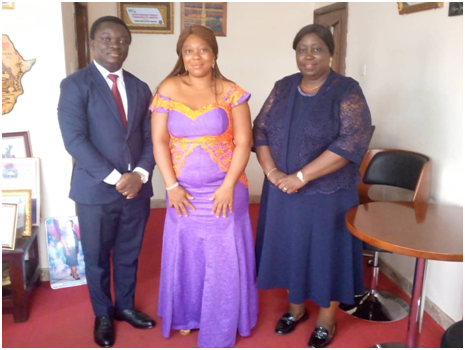 A client of the Legal Aid Board, Fatmata James, took possession on Saturday, 6 June 2022 of her share of the matrimonial property on Tower Hill in Freetown allocated to her by the court after the eviction of tenants by bailiffs.

Fatmata James was given part of the matrimonial estate even though the property is in the name of her husband alone.  The court had ruled that the matrimonial property is jointly owned and should therefore be divided between the wife, Fatmata James, who is the plaintiff and husband Sahr James who is the defendant. The latter is a member of the Republic of Sierra Leone Armed Forces (RSLAF)

The court ruling follows an application by the Legal Aid Counsel, Cyril Taylor-Young at the High Court before Justice Mohamed Bawoh for partitioning of the property following the decision of the husband to separate from his wife. The husband had done so by forcing her out of the matrimonial home by subjecting her to intimidation and domestic violence. He then went ahead to bring in her girlfriend who he has been cohabiting with since then. 2020

“I had no choice but to leave our home because he (husband) did not want to see me and our son anymore and he was getting paranoid, I was afraid he could do anything to get rid of us,” Fatmata James said.

Moreover, the husband should prepare similar document of an everlasting ownership pending the attainment of a freehold to the said land. Also, the husband was ordered to pay five million Leones (Le5, 000,000) to the wife which should be spread over a five (5) month period.

The matter was referred to the Legal Aid Board by the Gender Department of the Republic of Sierra Leone Armed Forces in February 2021. “Please give assistance to Madam Fatmata James whose marital status has been violated both domestically and psychologically by husband Sahr James of the 5thBattalion Wilberforce Barracks,” the referral letter notes.

“This lady reported marital issue on the 21 January 2021 and case scheduled for 23 January 2021. The matter was investigated and persuaded husband to see reason for reconciliation after 13 years of relationship with a child. The husband has threatened to divorce his wife,” the letter concludes.

Mediation of the matter by the Board stalled after Sahr James stopped attending the sessions. He became more interested in discussions around the mandate of the Board in terms of its jurisdiction over the matter than cooperating with the mediation. Moreover, he was adamant the property is not jointly owned because all the documents pertaining to ownership including the lease agreement were in his name alone. In the circumstance, the Board had no alternative but to go to court.

The Executive Director of the Board, Ms. Fatmata Claire Carlton-Hanciles has welcomed the judgement by the court describing it as a huge relief to the Board and most importantly female clients who find themselves in a similar situation. She underlined that the judgement has set a precedent which greedy husbands should learn a lesson from, that the person whose name is on the documents is irrelevant in determining ownership of a property that was acquired in the course of the marriage.

“We have had a similar matter involving an academic doctor who had wanted to kick his wife out of their house because all the documents pertaining to ownership were in his name,” she said. “It does not matter to him that the property was acquired in the course of the marriage and moreover the wife had contributed immensely to the property. He became cooperative once I told him in his face that the Board will institute legal action for permission to sell the property and divide the proceeds equally between the two of them.”