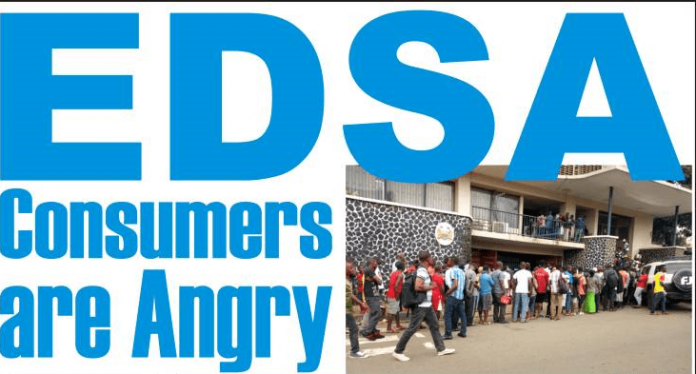 Even with the privatization of the National Power Authority (NPA) and the emergence of the Electricity Distribution and Supply Authority (EDSA) the general public is still facing serious challenges with regards accessing and enjoying stable, reliable and dependable power supply in the capital city of Freetown.
The high cost of unit, high cost of meters, forcing people to sometimes bribe before getting meters, delay in installation of meters, poor customer service and the recent tampered code are all serious bottlenecks that are causing undue suffering on customers.
Every day customers will have to queue at Falcon Bridge complaining of Tampered code but nothing serious is been done by EDSA to address it.
Last year, EDSA increased the price of social band to179%, the commercial rate for electricity was increase from Le 1,641kWh, to Le1, 795 which is a 9% increment and the institutional tariff was also increased from Le1, 526kWh to Le1, 678kWh all in the name of raising more revenue to provide better services to customers, but to the annoyance of many much improvement has not been realized. It is a huge burden for someone to electrify a newly built house in Freetown.
With all the funds received from the World Bank, Government and even revenue generated, EDSA is still grappling. Community residents have to spend millions of Leones on their own for to install terminals poles and cables within their areas in order to be connected to the EDSA grid a risk factor which at times leads to fire disasters in the city.
There are some communities within the city where electricity supply cannot even put on a television and in other instances destroy electrical appliances. In some cases the EDSA power will go on and off for the rest of the day.
With just few points mentioned in the story I think EDSA is enjoying extorting money from customers and create more suffering for them. The Ministry of Energy should step up to monitor the activities of EDSA.
.