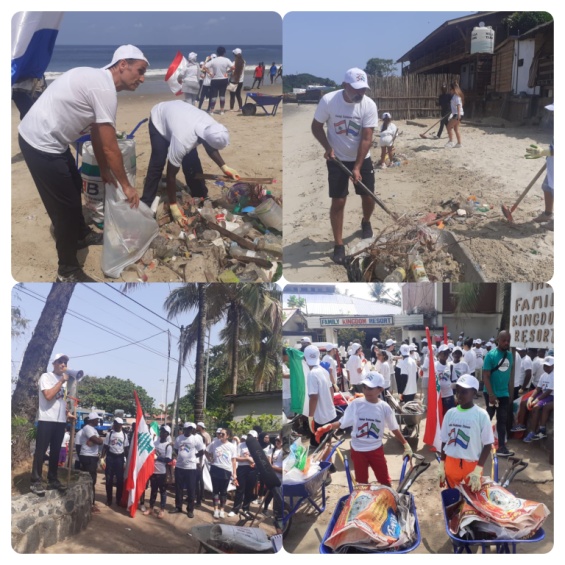 The Lebanese Community in Sierra Leone conducted a cleaning exercise on the 14th May, 2022 at the Aberdeen and Lumley Beach in Freetown  geared towards getting rid of plastic debris and other wastes.

In an exclusive interview with the Lebanese Ambassador, Hadi Jaber, during the exercise he stated that the Lebanese Community has been in existence in Sierra Leone for over 100 years underscoring how they have tremendously contributed to the growth of the economy in diverse ways stating that now they are contributing to environmental protection.

He disclosed that they just did not decide over night to embark on the cleaning exercise but rather such materialized out of proper planning disclosing that it is just one out of a series of planned activities they have in the offing which they intend to roll out in the country in order to show appreciation to Sierra Leoneans for peacefully co-existing with the Lebanese community.

The Ambassador  further pointed out that plastic debris has a negative impact on marine species stating that when marine animals consume plastics the toxins those debris contains breaks down inside their bodies and so when we humans eat seafood we are consuming the same emphasizing such is why it is necessary for all to embark on such cleaning exercises, more so to preserve the environment.

“We are living in this country and we have to work hard to keep it clean. Our Sierra Leonean brothers and sisters thank you for coming in to join us,” the Ambassador expressed gratitude.

He said they will continue to raise awareness among the Lebanese Community and Sierra Leoneans about the importance of preserving and protecting  the environment and assured of their commitment to render support in that area.

In his own contribution, Jihad Swaid, CEO of EcoMed and AfriGas, said the main purpose of undertaking the exercise is to raise awareness about what is going on the beaches.

He continued that they also want to show the whole world that this is their country and it is incumbent on them to see that it is always clean as well as to raise awareness about the negative impacts of plastic debris in the ocean.

He furthered that plastic debris are affecting tourism disclosing that Lumley Beach was known to be the best Beach in Freetown but lamented that it has lost that glory.

“We always come together to see a better Sierra Leone,” Jihad Swaid intimated maintaining that there are several benefits for undertaking such an exercise. He mentioned how the effort is worth emulating and called on everyone to embark on such an exercise in order to keep the country clean.

Samir Kholnelzer, the General Manager of Wadih Brothers, said tourism is one of the sectors that the derive income from adding that it is always good to preserve the environment.

He disclosed how they will continue to tackle the issue of plastic debris along the coastal areas also maintaining that they are trying to conduct a research on how to come up with a lasting solution to squarely deal with the issue.