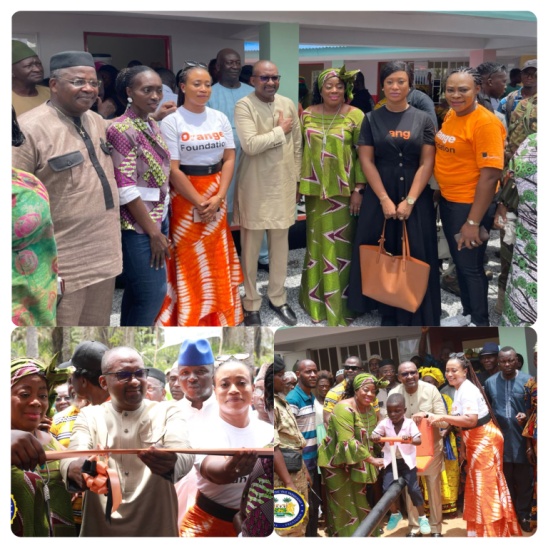 Known for timely rolling out its Corporate Social Responsibility, Orange Sierra Leone, one of the country’s leading telecommunications operators ,  through one of its appendages, Orange Foundation, has on the 13th May, 2022  facilitated the commissioning of a newly constructed ultra-modern Early Childhood Development (ECD) Centre   at Petifu Junction, Petifu Section, Lokomasama Chiefdom within Port Loko District, Northern Sierra Leone.

The pre-school,  just like  the others that the company built and commissioned in different parts of the country, will serve as a solid educational foundation for kids residing and growing up in that part of the country.

It must be noted that in order to support the Government’s flagship programme of Free Quality Education Orange SL pledged the sum of One Million, Five Hundred Thousand United States Dollars (USD1.5m) as its contribution, to be embedded in rolling out that support in different phases.

In his contribution before commissioning the Centre, the Vice President, Dr. Mohamed Juldeh Jalloh, thanked His Excellency the President, Rtd. Brig. Julius Maada Bio for his vision in education and especially for introducing the Free Quality Education Programme in Sierra Leone.

He also extended appreciation to Orange (SL), especially the former CEO , Aminata Kane, for the construction of the pre-school for which he said the people of Lokomasama would ever remain grateful to the Ministry of Basic Education and the Company.

VP Juldeh Jalloh, who purchased the land where the facility was built, also committed to fence the ECD Centre and provide the first set of uniforms for the kids.

Earlier, speaking at the Commissioning of Early Childhood Development (ECD) Centre,   the Acting CEO of Orange SL, Haffie Haffner, told the audience that the company is here to make a difference in the lives of people furthering how they do not only provide mobile services to customers but they are also partnering with Government and other well meaning entities to impact development in the lives of people.

Madam Haffner revealed how they asked the Ministry of Basic Education what they should do in translating their pledge revealing that the Ministry came up with the idea of the Early Childhood Development Project which, she said, has culminated in the construction of an Early Childhood Development Centre  which they are now about to commission in order to benefit residents of Lokomasama.

She informed the gathering that, in 2020 they committed to start with the construction of Early Childhood Development Centres, one in Moyamba,  the others in Kambia and Pujehun revealing how they have added two more, one in Bonthe and the newly constructed one in Lokomasama that will be commissioned.

The Acting CEO disclosed that  in their commitment to support the Free Quality Education  they promised to work exclusively to design five projects that will be funded from their $1.5 pledge which she said  include providing  menstrual hygiene kits to school going pupils, establishing super coders scratch labs in schools, facilitating Inter School debating competitions with the winners having  labs constructed in their schools, distributing 1000 pieces of Solar Kits to different villages and facilitating e-learning to benefit teachers.

The Paramount Chief of Lokomasama Chiefdom, Bockarie Bangura, expressed profound appreciation to the Government and the company, on behalf of residents, who graced the occasion in huge numbers.

Forming the highpoint of the occasion was when residents jubilantly appreciated Orange SL singing songs of praise and thank-you for what most referred to as a positive development and good offer.