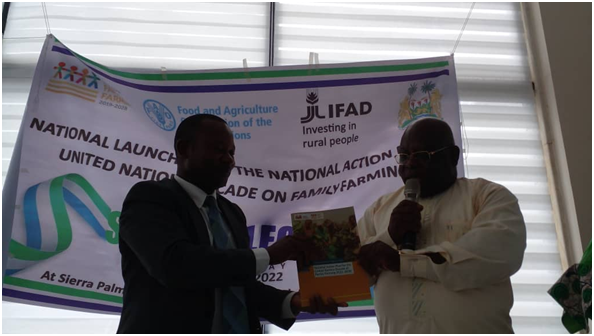 The Minister of Agriculture and Forestry, Dr. Abubakarr Karim, formally launched the national action plan for the United Nations decade of family farming 2021-2030 on the 17th November 2022 at the Sierra Palms Hotel on Aberdeen Beach.

The ceremony was graced by various stakeholders in the agricultural sector including the National Farmers’ Federation, Agricultural District Officer Smallholders farmers with all admitting to have contributed towards the drafting of the document.

The Minister stated in his keynote address that he is very concern about farmers’ welfare as they are the reason for the existence of his Ministry stating that family farming will be an economic, social, cultural and environmental model governed by economic and social relations.

Minister Abubakarr Karim added that with the predominance of agroecology  and other sustainable  practices  of production  associated with business management, gender equality ,means the recognition  of women’s rights  and the strengthening of women’s role in family farming   and food security  will lead to women  empowerment  which will in turn improve  their livelihoods and the sharing of household responsibilities .

He said, in addition, short marketing circuits will be strengthened and women and young  people empowerment  in value  chains and food security  will be boosted ,

Saeed  A. Bancie, the  Food and Agriculture Organization representative in Sierra Leone who also spoke on behalf of the   UN Resident Coordinator to Sierra Leone  noted that  he was gratified by the premium the Ministry of Agriculture places on family farmer stating that the Global Action  Plan was  launched as a tool to address some of the challenges faced by family farmers  and it spans onto 2030.

The FAO Representative said family farming is very important especially at a time after the global crisis which Sierra Leone is not immune to adding that family farming will improve the knowledge input of farmers, and it is with the hope that   it promotes political commitments.

He said when that is achieved it will increase the availability of a food system which in turn can offer new economic opportunities and increases urban rural lineages. He ended by stating that the FOA is committed in assisting Government towards achieving such a dream.

National Farmers Federation Sierra Leone representative described the day as a dream comes true  and thanked all those who made  such a  dream a  reality. He said the Federation exists to steer the mantle of smallholders and are well abreast with their numerical strength and weaknesses.

The grey areas,  he  noted, that need to be addressed are   the action plan should have a strong political leadership  to succeed, it should be inclusive of small holders  through business models since  market remains  a big challenge for their products, it should strive to promote sustainability standards for farmers along  the value chain and to share knowledge, experience  and that procurement should involve  the farmers and finally to  develop a national action plan.

Dr, Mohamed Agiba Sheriff, Director of Agriculture, who chaired the ceremony stated that  Sierra Leone  has to domesticate that action plan  after it has been  finalized  as it will contribute to food self-sufficiency and that they have come a very long way  to making  this a reality  and was happy that the representative was all encompassing including academic, CSOs, media  researchers among others  after series of consultations with the launching to be followed by popularization and implementation  of the plan

The vote of thanks was rendered by the Deputy Minister of Agriculture Dr. Theresa Dick.