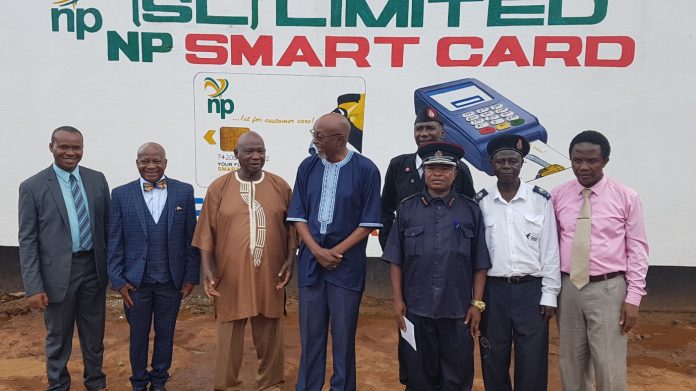 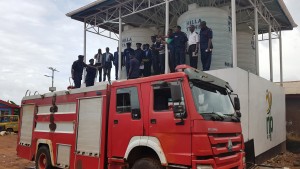 On the 26th September 2019 the National Petroleum –Sierra Leone Limited (NP-SL- Ltd) handed over to the National Fire Force (NFF), Kissy Branch, a newly constructed water facility comprising water tanks, bore hole and a generator geared towards capacitating the force in its fire extinguishing operations within the capital city of Freetown.

Present at the auspicious ceremony were the Chairman of the Board of Directors of NP, Mike Caroll, one of its Directors, Alhaji Abdul Rahman Abdullah, the company’s General Manager, Kobi Walker, the Chief Fire Officer, Naizer Alie Ahmed Kamanda Bongay, the Senior Assistant Secretary of the Ministry of Internal Affairs, Tamba Sam, a cross section of staff of NP and the National Fire Force.

Delivering his welcome address, the Chief Fire Officer stated that indeed it is a wonderful day in the history of his institution disclosing how most of the hydrant points in the city are connected to the Guma Water Company but lamented that currently there are only ten hydrants existing but only the one at the East End Police station is functioning effectively. He said they made an appeal to NP to beef up their accessibility to water supply and they responded swiftly and favourably.

“NP is the only institution in this country that has so far come to the aid of the National Fire Force in that direction,” he heaped praise on the company. He noted that this is the second commissioning of a water facility provided by NP to the National Fire Force, the first being at the NFF headquarter in Freetown.

He said there is no retreat in firefighting and expressed gratitude to NP for what he called a well-meaning gesture. He pledged himself and fire fighters to judiciously utilize the facility for its intended purpose stating how they will put stringent measures in that vein.

Representing the Minister of Internal Affairs, the Senior Administrative Secretary in the Ministry, Tamba Sam, first thanked NP for the offer saying whoever gives support to the NFF is supporting himself or the entity that such a help is coming from.

“I am appealing to all to conduct ourselves appropriately in the way we use electrical appliances because by putting preventive measures in place we will minimize the outbreak of fire disasters,” he admonished. He called on other entities including Non-Governmental Organizations to support NFF. “We can only go to bed peacefully when we believe we are safe.”

On his part, the General Manager of NP, Kobi Walker, jogged memories back to the 15th November 2017 when they handed over a water storage facility that they constructed and handed over to the NFF at Tower Hill.

“During that period our Chairman informed the gathering that NP-SL will construct another water storage facility for the NFF at their Kissy Branch,” he said furthering that they were again fulfilling and honouring that avowed commitment.

He said the role of the NFF in saving lives and properties cannot be over emphasized stating that it is a known fact that the NFF is challenged with accessing dependable sources of water especially in the East End of Freetown to support their firefighting mandate and activities.

“Water is life and an essential tool used in combating the conflagration of fire that has the potential to destroy life and property,” he continued highlighting how with a target population of approximately 3 million lives in Greater Freetown we need a Force that is lean and mean, combat-ready with the necessary wherewithal for prompt and effective disaster response management.

“Even though the harsh economic realities and fundamentals are negatively impinging on NP-SL’s profitability and sustained growth agenda we are compelled and duty bound to provide this facility for our very own fire force,” he registered their preparedness.

The high point of his statement was when Kobi Walker said: “As a damn good corporate citizen and being mindful of our pole position in our market place we consider the National Fire Force as a worthy partner as our roles are intricately interwoven since we deal in products that are highly combustible.” He said to strengthen the enviable relationship; their company is compelled to empower the Force with the much needed logistical support to help improve their invaluable service to society.’

Attracting a deafening round of applause from the audience was when Kobi Walker maintained that a rather compelling reason why they thought it fit to provide the facility is the realization that the Kissy location of the Fire Force is very close to the terminals of the oil marketing companies that store the needed and highly combustible products.

He said: “To this end we are ecstatic to inform all gathered here today that NP-SL Ltd is providing the Kissy branch of the National Fire Force with 4 water storage tanks with a capacity of 10,000 litres each. The effect of this is such that a minimum of 4 fire engines will be on stand-by with 40,000 litres of water at any given point in time for prompt response to emergencies.”

NP’s General Manager further intimated how they constructed a bore hole on the premises of the Force using latest technology to ensure the constant availability of water at all times. He said as if that is not enough they also provided an electronic pumping machine and a brand new 9KVA generator for the supply of power to the water facility.

He assured that NP-SL Ltd will continue to play a dominant role in the socio-economic development of Sierra Leone and the well-being of Sierra Leoneans.

In another remarkable development, the National Petroleum-Sierra Leone Limited on the 25th September 2019 commissioned its newly renovated filling station on Black Hall Road in Freetown.

Again the indefatigable General Manager of the company, Kobi Walker said, during the event, that NP-SL has been operating in the Black Hall Road vicinity for the past 30 years and it has been serving humanity but commissioning the newly renovated filling station will renew the bond between NP-SL and the people of Sierra Leone.

He said since its establishment, the company has grown from leaps and bounds, weathering storms that would have run it down but because of the determination of 35 shareholders who bought offered shares and the Management of NP-SL, the company has been maintaining high standards throughout the sub-region. “We are steadfast in continuing to provide the general public with qualitative services,” he assured.