By Samuel Koroma in Beijing, China 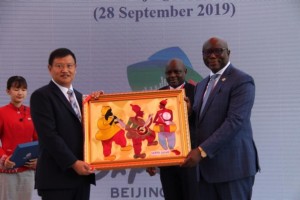 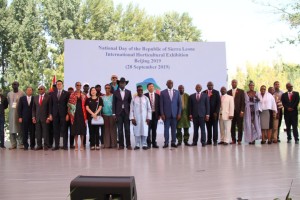 Sierra Leone’s Ambassador Extraordinary and Plenipotentiary to the People’s Republic of China, Ernest Mbaimba Ndomahina has on the occasion of the National Day Celebration for Sierra Leone in China vouch to strengthen Sierra Leone’s bilateral relationship with China, and make that relationship a win-win one. The celebration held at the Beijing 2019 International Horticultural Expo was characterized by traditional pomp and pageantry, as the audience was wowed with pristine Sierra Leonean cultural performances.

The theme of the Beijing 2019 International Horticultural Expo centers on “Live green”, and “Live better”. It’s a platform that aims to enhance advocacy for efforts to tackle global environmental issues of climate change and disappearing ecological systems.

Ambassador Ernest Mbaimba Ndomahina delivered an impressive speech, noting among other things ,the preparedness of Sierra Leone to showcase its rich culture and horticultural beauties . He commended Beijing Expo 2019 for the occasion, while noting with delight that it was positively rewarding to see the two countries share the significance of the occasion.

He commended President Julius Maada Bio’s commitment to the global concerns of biodiversity conservation and climate change, and ensuring the participation of the Republic of Sierra Leone at the Expo through the country’s abled Commissioner General, Philip Conteh. He said the Republic of Sierra Leone has had 48 years of fruitful friendly diplomatic relations with the People’s Republic of China. Both countries have held years of successful cooperation and partnership, Ambassador Ndomahina said, noting that their bilateral ties have been to a comprehensive strategic status.

Though frantic efforts have been made through speeches, awakening of the minds’ eye through exhibitions, the drums meeting the rhythms of ones hearts and echo in the air, the Great Amazon Forest Ambassador Ndomahina said is on fire and burning, hurricanes and typhoons are raging with devastating effects, and instability and wildlife poaching are taking their toll on ecological systems in different parts of the globe. Yet, he noted there are communities that are pushing to derail the efforts of others in the fight against climate change with its attendant effects of disruption of the global ecological systems.

He urged communities of every nation to work and ensure they deliver a safe and healthy environment to the generations that would succeed it, if each community must survive the decades and centuries that lie ahead. The constant obstruction of our global ecological systems by the way of life of man has proven to be nothing but disastrous to our world, the only home we know, Ambassador Ndomahina added.

He concluded by reechoing Sierra Leone’s effort to deliver a healthy biodiversity-rich environment to explore nature at its best, citing the numerous and wide white and gold sandy beaches, shallow coastal wet lands and mangrove swamps, it wildlife sanctuaries at Tiwai Island in the South and Taca-Guma on the Freetown Peninsular in the West. Forest reserves and mountains, he added provide homes to different species of primates and aquatic bionetworks, and the various vegetation distinguished according to land forms, which remains the untapped treasure that Sierra Leone, the most peaceful and tolerant nation on planet earth, could offer to the world.He  called on all to visit Sierra Leone for a fresh breath of the gifts of nature.

Delivering a statement during the ceremony, Head of Infrastructure, Beijing Expo 2019, Zhang Lannian said China respects the autonomous choice of the people of Sierra Leone, and is willing to engage in close and high-level contacts with Sierra Leone to strengthen the exchange of experience in the rule of law and administration, to expand on cooperation in the fields of infrastructure construction, agriculture, fisheries, health, education, and capacity- building, and to continue to support each other in the multilateral sphere.

The two countries, he affirmed, has made tremendous efforts to promote bilateral relations.

Since the establishment of diplomatic ties, the two countries have always been realizing the common interest and having a good friendship, Mr. Lannian noted.

Every community of every nation must work to ensure it delivers a safe and healthy environment to the generations that would succeed it, if each community must survive the decades and centuries that lie ahead.