With the objective of reinforcing their commitment and putting smiles on the faces of their subscribers, one of Sierra Leone’s leading GSM Mobile operators, Orange Sierra Leone, on Monday 25th November 2019, launched an end of year promotion called “Cha-Cha di Holiday” at their branch office on Rawdon Street in Freetown.

Delivering her statement, the Chief Executive Officer of Orange-SL, Aminata Kane, expressed profound appreciation to their valid customers for believing in the company as the best telecommunications company in Sierra Leone. She disclosed that in May and June 2019, Orange-SL availed over 450 customers the opportunity to have food items on a daily basis, for a month, besides the grand prize of one (1) year food supply for 6 customers plus Le25 million chop money; in their Ramadan Promotion.

The CEO maintained that as Orange SL continues to reinforce its commitment to their customers, they have introduced their end of year Holiday Campaign dubbed “Cha-Cha di Holiday”. She said that during the festive period they usually celebrate with families and friends, as it is now time for fun and merriment plus reflection on how Orange-SL has impacted the lives of people, families and communities.

She noted that as a company, they will continue to be innovative and resilient in bringing to their numerous customers affordable voice & data offers, adding that they reduced the price for internet twice this year as part of their digital Revolution Strategy.

She further disclosed that with regards financial inclusion, the customer base for Orange Money increased with over 650,000 customers, who can now send and receive money, pay for goods and services at their own convenience.

She furthered that they have been involved in several CSR activities touching the lives of students, women, the youths and young girls across the country, noting that as the year rolls out, they want to touch again the lives of over 450 households, affording them opportunities to be financially sustainable.

“After several interactions with our customers all over the country (Moyamba, Kabala, Makeni, Mile 38, Tombo, Wellington etc), talking to women, Okada riders, students, nurses etc. we asked the question: what is more essential to them at this material time? We noted that it is the wish of most Sierra Leoneans to own a business and with these feedbacks, we designed a very exciting campaign to close this year,” she again disclosed.

The CEO, on behalf of the Management and Staff of Orange SL, officially launched the amazing campaign, “Cha-Cha di Holiday” with the package of 6 customers winning a business of their choice worth 75 million Leones and 420 customers to win cash prizes worth over 400 million Leones. She assured the gathering that they will continue to impact meaningfully the lives of their customers with affordable offers and give back to Sierra Leone in terms of rendering support to the Education, Health sectors and human capital development, as well as supporting the Government in its digitalization drive.

In another development, the Chief Executive Officer of Orange Money, David Mansaray, presented the sum of Le50 million Leones with  Le25, 000,000 each to two lucky grand winners, Lucy Conteh in  Freetown and Desmond Campbell in Makeni in respect of their just concluded back to school promotion.

The two lucky winners expressed appreciation to Orange Sierra Leone for the great gesture, maintaining that with this money they believe it will change their lives for the better. 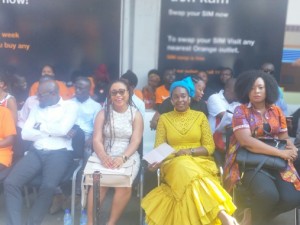 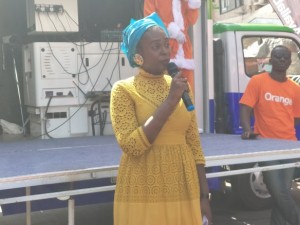 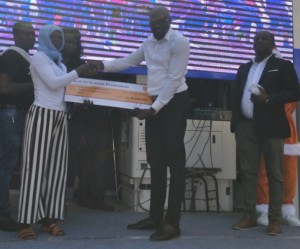 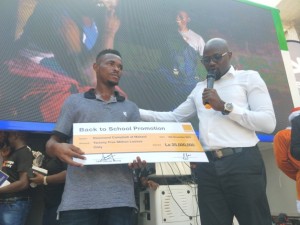