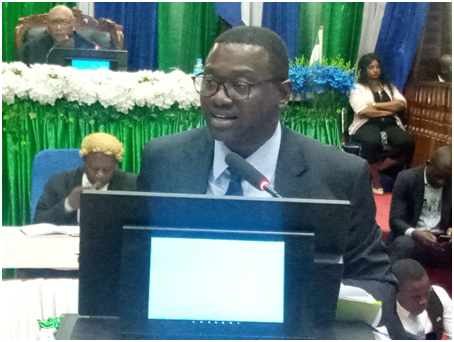 A loan agreement to the tune of $5 Million to enhance and improve on digital educational platforms in the country was debated and ratified by Parliament on Thursday 27/10/2022.

The loan agreement was between the Government of Sierra Leone and the Islamic Development Bank on digital connectivity in schools on accelerating educational response during the COVID-19 pandemic.

Presenting the loan agreement, Deputy Minister of Finance II, Sheku Ahmed Fantamadi Bangura said it was aimed at restoring education through the acceleration of digital connectivity to schools during the COVID-19 pandemic. Furthermore, he said it was a $5 Million loan with a seven years grace period to be repaid in twenty-five years. He also said that the project would benefit many schools across the country.

Chairman of Finance Committee in Parliament, Hon. Francis Amara Kai-Samba in his contribution to the debate said the agreement was simple and straight forward with the aim of accelerating and strengthening e-learning in the country amid COVID.

Hon. Abdul Kargbo however expressed fears on the successful implementation of the e-learning project claiming that one had already failed, and informed the House that the company in question should be summoned to Parliament for questioning.

Hon. Joseph Williams Lamin challenged the submission made by Hon. Abdul Kargbo and called on the Minister to apply due diligence during the course of implementing the e-learning project that will benefit over 500 schools in the country.

Hon. Dr. Mark Mahmoud Kalokoh spoke on the necessity of digital connectivity to schools and also said a similar project had failed during implementation.

Hon. Hawa Siaffa spoke on the content of the agreement and described it as good for the improvement of education in the country. She called for speedy ratification of the loan and said that they did not have such an opportunity during their days in school.

Hon. Musa Fofanah said that the agreement was non-controversial and expressed satisfaction over the provision of internet connectivity to schools across the country as per the agreement. He also called for effective monitoring and evaluation of the e-learning project.

Speaking on the importance of the loan agreement, Hon. Lahai Marah said that the idea behind digital connectivity to schools was a good initiative. He also spoke on audit during COVID and expressed fears on accumulated loans that have been taken over the years citing debts servicing and sustainability in the country amid weak revenue mobilization.

Acting Leader of the Opposition, Hon. Hassan Sesay said that they would always support development project in the country and recalled the failure of a similar project that was supported with $34 Million by China Exim Bank. He also said that a project of similar nature should now be monitored robustly to prevent a reoccurrence.

Concluding, the Acting Leader of Government Business, Hon. Bashiru Silikie said that the agreement was in line with the implementation of the free quality education in the country. He assured MPs that the e-learning project was going to be implemented with a very strong supervision by agencies of Government to ensure it meets the needs of the target beneficiaries. On debts accumulation, he assured MPs that those debts were going to be serviced accordingly. He also called on Parliament to up its oversight responsibility and called on the affected agencies of Government to ensure that the agreement was properly implemented for the benefit of schools across the country.