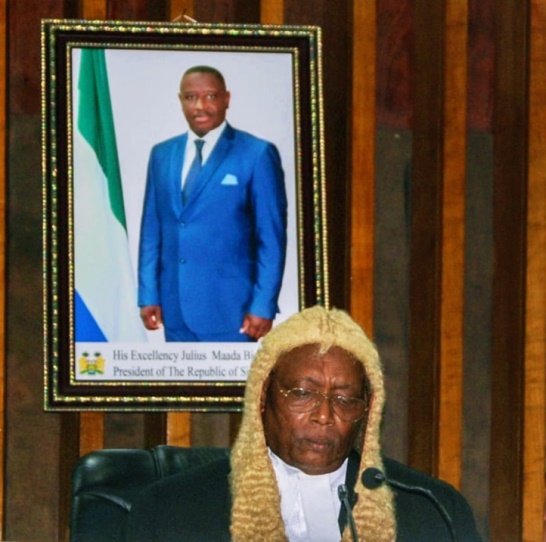 Thursday 2nd July 2020  marked the commencement of debate by Members of Parliament on the Speech which His  Excellency the President, Dr. Julius Maada Bio graciously delivered on the occasion of the State Opening of  the Third Session of the Fifth Parliament of the Second Republic of Sierra Leone in the Chamber of  Parliament on Thursday 28th  May 2020.

Proposing the motion for debate, the Leader of Government Business, Hon. Mathew Sahr Nuyma thanked His Excellency the President for delivering his scorecard on the State Opening of Parliament. He pleaded with colleague MPs to give maximum contributions to the President’s address and urged them to do justice to it,by making meaningful contributions in the areas of Health, Agriculture, the Environment, Education and other related developmental programmes embedded in the “New Direction” manifesto.

Seconding the motion, Hon. Francis Amara Kai-Samba of SLPP said the Speech delivered by President Bio captured some of the tremendous tasks that have been fulfilled by health workers to combat COVID-19. In the area of education, he said President Bio has accomplished a lot through the introduction and implementation of the free quality education especially on budgetary allocation.

Hon. Rugiatu R. Kanu of the main opposition APC commended the President for the Speech delivered to Parliament on the occasion of the State Opening of Parliament. She decried the free equality education by stating that many aspects of quality education are not in place, such as placing more burdens on parents instead of supporting them.

On his part, Hon. Saa F. Bhendu of C4C acknowledged the significance of the President’s address to Parliament. Speaking on high interest rates on loans by the banks, he commended Government for the introduction and implementation of the national safety net programme by transferring cash to vulnerable citizens in the country.

In his contribution to the debate, Hon. Ibrahim Tawa Conteh of SLPP said the Presidential address is a total manifestation of Government’s action to improve human capital development citing an increase in the number of educational facilities in the country. Relating to road network, he said, Government has done a lot of rehabilitation, maintenance and reconstruction of roads across the country. He also praised the Government for taking concrete steps aimed at improving the socio- economic development of the State.

Hon. Daniel Koroma of APC said the role of the opposition is to help Government to achieve its aims and objectives and called on the Government to provide total peace and stability for its citizens. He decried the Government’s policies on the economy based on the Millennium Challenge Cooperation’s Report of 2020.

Submitting to the debate, Hon. Komba M. Kamanda of C4C commended the Government for the improvement of the health sector and urged Sierra Leoneans to love one another devoid of political and tribal sentiments for the socio-economic development of the country.

Hon. Shiaka Musa Sama, an Independent MP from Pujehun applauded President Bio for the Speech delivered to Parliament and commended him for putting together stronger laws to combat rape and related offences. He also called for reformation and upgrading of the prisons service.

Making his contribution, Hon. Abdul Latiff Sesay of APC said at present there is a bloated wage bill and called for salary harmonization. He also called on Government to capacitate the youth for better standard of living.

Hon. Kekura Vandy of SLPP said the energy sector under the leadership of President Bio has achieved a lot of reforms geared towards adequate and sustainable energy supplies in various parts of the country.

Other MPs made brilliant contributions to the motion and the debate continues tomorrow in the Chamber of Parliament.

The Parliament of Sierra Leone extended thanks and appreciation to the Management of SLBC for streaming the debate live on TV and their Facebook Page amidst COVID-19.