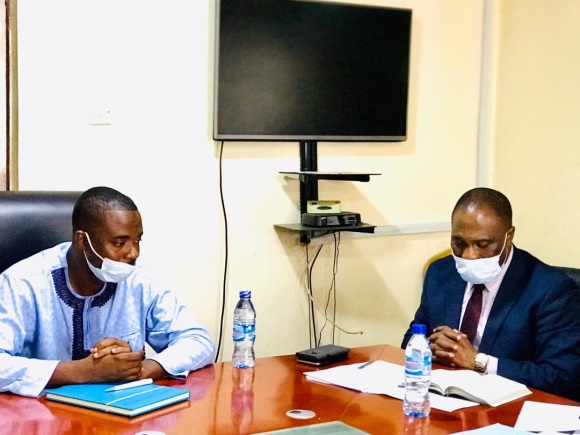 On the 30th June 2020 the Minister of Planning and Economic Development met with the Executive Director of the Sierra Leone Road Safety Authority (SLRSA), Ibrahim Sannoh and members of his staff at the SLRSA Board Room on Kissy Road.

The meeting was a follow-up on President Bio’s call to provide political orientation and to help public institutions accelerate effective service delivery in 2020 and beyond.

It also came as a result of the first presidential seminar for Heads of Institutions at the Bintumani Conference Centre on the 25th February 2020, where H.E. President Julius Maada Bio recognised the important role and contribution of commissions, parastatals, agencies and state-owned enterprises to the achievements of his New Direction Agenda and declaring 2020 as the Year of Accelerated Service Delivery.

Delivering his address, the Minister of Planning, Dr. Francis Kai-Kai said that the process was to ensure that SLRSA had clear deliverables and deliver on its targets in order to play a significant role to achieve the vision of President Bio’s Agenda to change and transform the lives of ordinary Sierra Leoneans.

He said such practice had lapsed across Government for a very long time and that some agencies were no longer providing the required service delivery to the public. Dr. Kai-Kai said this attracted a lot of public outcry, which drew the attention of President Bio.

“We need people who can and are ready to deliver promptly to the people. President Bio intends to make performance management systems for officials and public institutions more effective and result-oriented. This also includes ensuring that there is greater accountability for poor performance— hence the need to put in some performance benchmarks for all of us,” said Dr. Kai-Kai.

The Minister, then, introduced Dr. Robert Moikowa, the Director of Service Delivery and Performance Management at the MoPED and his team, who would continue the process of following up with the SLRSA. Previously, the Minister visited NPPA, EDSA, EGTC, NASSIT, SALWACO and the SLPA. He would continue visits to other public institutions, in the coming weeks.

Responding to the Minister, the Executive Director of SLRSA, Ibrahim Sannoh thanked the Minister and Team for the timely visit and recognized the importance of the process in achieving the New Direction Agenda.

He explained that the overall output of the agency was to digitize the activities of SLRSA, adding quality, value and innovation to its services rendered to the public.

While mentioning the many challenges the agency faces, he said they were working towards developing a strategic plan, reviewing its HR policy among other things to improve the overall output of the SLRSA.

Dr. Robert Moikowa, the Director of Service Delivery and Performance Management commended the work of the SLRSA for their efforts in working towards achieving the ultimate goal of Government’s commitment to sustain socio-economic activities. He emphasized on the need for both teams to coordinate and collaborate effectively in accomplishing the task. 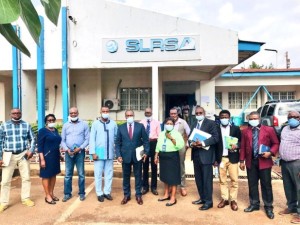