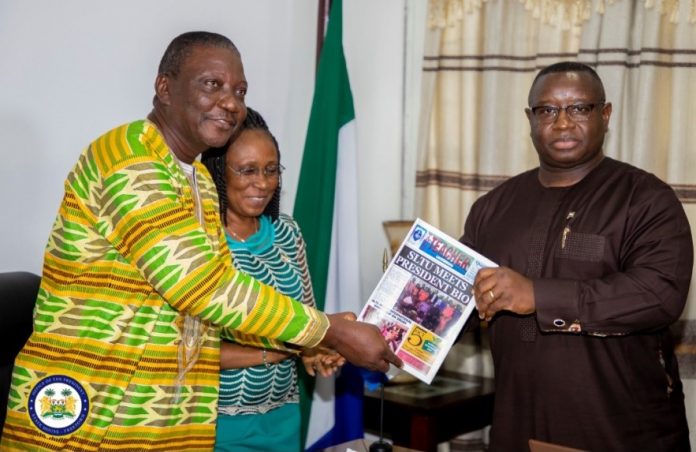 On Tuesday 2nd September, members of the Sierra Leone Teachers Union, SLTU met with His Excellency President Dr. Julius Maada Bio at State House to discuss their role in the successful rollout of the Free Quality Education program.

Presenting the visiting team, Minister of Basic and Senior Secondary Education, Alpha Osman Timbo, said the Union was renewing its commitment to meeting the President once in a while to discuss matters relating to the teaching profession and the general aspirations of the State, noting that as social partners it was part of their responsibilities to engage Government.

President of the SLTU, Mohamed Salieu Bangura, recalled that in their meeting with the President last year they assured of their readiness to work with the Government in ensuring the success of the Free Quality Education Programme. He said they were happy that Sierra Leone was one of the few countries in Africa that had taken up the challenge of providing Free Quality Education as a means of developing their human capital.

He said they were meeting the President again at the threshold of a new school year with the Free Quality Education to re-commit themselves, as drivers of the Government’s flagship programme, and to ask Government to provide them with the necessary tools to successfully wage the war against illiteracy in the country.

“We appreciate Government’s efforts so far and expect more to be done in this journey of realizing our dreams as a nation. We remain optimistic with Government’s assurance that teachers are important component in the development of Sierra Leone and that Government will work with our Union to ensure that teachers, who spend their lives building this nation, live in comfort,” he said.

In his response, President Julius Maada Bio said that he was happy to meet with teachers, who play a great role in building an informed and intellectual society. He said Government was well aware of the needs of teachers and assured them that the Government was actively looking into ways to further improve on teachers’ welfare. He also commended the teachers for their service in building the future of the country and encouraged them to continue the good work.