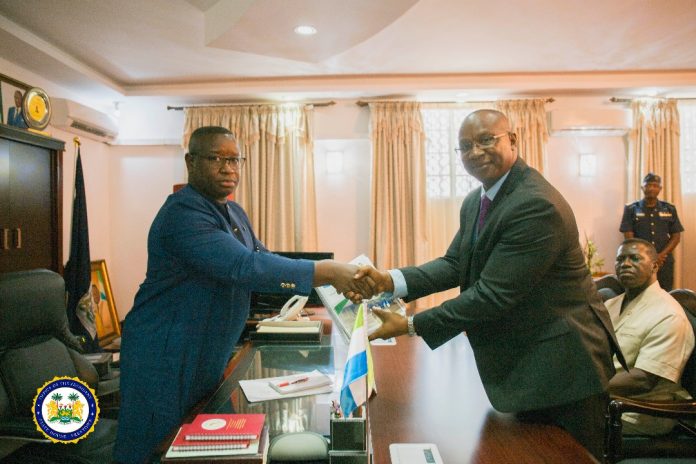 A Sierra Rutile Special Taskforce, set up by Government to investigate the disparities between the Sierra Rutile Mining Company and the Workers Union, has called at State House to present its findings and recommendations to His Excellency President Julius Maada Bio.

Chairman of the Taskforce, Julius Partai, said it was a pleasure to serve the government and the people of Sierra Leone through the independent taskforce that investigated the incident that occurred at Sierra Rutile a few months ago. He said the investigation was a collective responsibility and noted the he was happy with the support he received from the community people, the police and the Republic of Sierra Leone Armed Forces.

Mr Partai said their meeting with the President was to present the report, which had cost them sleepless nights, adding that the findings and recommendations in it were well detailed and done with all levels of fairness and integrity. He stated that they were aware of how important the mining sector was, especially in boosting the local economy through payment of taxes and creation of jobs for citizens.

“There are a lot of issues in the report which need the urgent attention of government and we are ready to work with the government to ensure that government benefits from its natural resources. We know that since minerals were discovered in the country our communities have been plagued by a series of issues and sometimes the expectations, in terms of what we should be getting as communities from the mining companies, have not been met.

“Like you know, there are a lot of issues in these communities that needed urgent attention from government and it is our pleasure, based on all those evidence collected and based on all the inputs we have collected from all stakeholders, that this report has been conducted to the best of our knowledge and ability. The next stage, we look forward to the leadership to ensure that the vision of the New Direction is accomplished,” he urged.

On his part, President Bio thanked the team for taking their time to perform to the best of their abilities. He said the nation was trying to regularise a lot of things and that as a government, they were bound to strike the balance to ensure that there was a conducive environment that encouraged investors to operate as well as making sure that the rights of citizens were protected.

He recalled that the issues were creating insecurity in the country and that was why government had decided to intervene. He said he would look into the findings and recommendations of the report to know the different expectations from the company and the community and would continue to engage and dialogue with the various stakeholders to reach a common ground.

He said that: “We want to get this resolved as quickly as possible because we want to move on and do not want this to drag into the momentum that we want for the economy. We will honestly look at what is possible and try to find a middle ground and make sure that the issues are quickly resolved.”

It could be recalled that following the workers’ unrest and strike action at the Sierra Rutile, government held meetings with all the critical stakeholders and a special taskforce was formed to do an independent investigation on the outstanding issues that precipitated the union workers’ strike. The taskforce was facilitated by the Office of the Chief Minister.